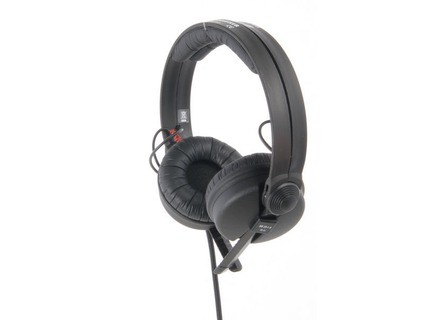 HD 25-1 II, Studio headphone from Sennheiser in the HD 25 series.

Product replaced by the Sennheiser HD 25 PLUS.

View other reviews for this product:
07/21/14
Used intensively since March 2014 comfortable and efficient. Listen, lightweight headset and well isolated from the outside world for many perceive everything we hear between the two headphones.
This is my third headphone (including a Sennheiser 1978 open I can not remember the reference but I farted like an idiot ... rather than throwing it on the floor to avoid a beating fuck my ex I should have done the opposite, I would win out: lolunpeumaispastantqueça

.
Apart from its grip after a while, and the price ridiculous side which I touched nine (a limited edition blue Addidas that nobody wanted), it is a quality / price ratio outside the norm, and m 'encourage surely make the same choice if necessary.
8/10

07/21/14
Originally purchased to replace my Panasonic definitely too oriented "headphones for MP3" and supercharged bass. The HD 25 was originally not intended to be recording, mixing only in control, but given its qualities, and although it is shallower than my Panasonic, I also used my cabin making voice because it is better to sing with balanced in his ears rather than his big bass made.
His failure has already been quoted: he shook heartily. After two hours, break essential, which is not bad in terms of listening. Add to that the original headphones are covered with plastic cushions, and is sweating warranty. I immediately bought on the net foam blue velvet, and this is the top.
8/10 thanks to the foam.

07/21/14
Apparently solid construction. Many spare parts available on the net full of dealers. I appreciate his dual gold plated terminals screw that allows you to switch jack to mini-jack.
9/10, because of construction, and the hoop clamp is not very malleable.

07/21/14
I find it very balanced. An index to judge, no ear fatigue after a few hours of listening with EQ set flat. It therefore gives him a faithful character in terms of restitution of audio content, corrections EQ being met.
The noise level is very good, and it cut perfectly from the outside world, while paradoxically, it is not silent on the environment. Namely, repisse issue in micro high sensitivity, for example, when it is recorded in quiet atmosphere.
9/10 for the almost inevitable repisse (but measurable)
See the source
Did you find this review helpful?yesno
Cookies help us improve performance, enhance user experience and deliver our services. By using our services, you agree to our use of cookies. Find out more.