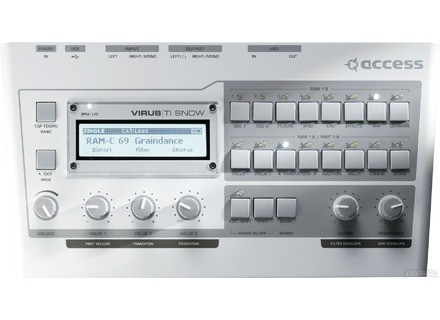 It will be a very limited edition as they'll only produce 15 Black Editon Snows.

The Snow features 4 multimode parts and about 50% of the polyphony in comparison to the bigger models. Those result in everything in between 10 and 50 voices with the same signature sound like all other Virus TIs. Each voice can use up to four oscillators in parallel including Virtual Analogue, Wavetable, HyperSaw and Grain Oscillator models.

In Multi mode, your patches sound identical and include all of the effects, the company says. The 4 independent parts can be routed to 1 Stereo Analogue or 3 USB outputs streaming audio into your sequencer workstation. The software suite includes a VST, RTAS and AU compatible plug-in allowing for recall, timing and modern automation features.

The audio inputs and outputs can be optionally used as a sound card in your sequencer. The hardware knobs can be used to either control the Virus' sound engine or compatible third party software plug-ins.