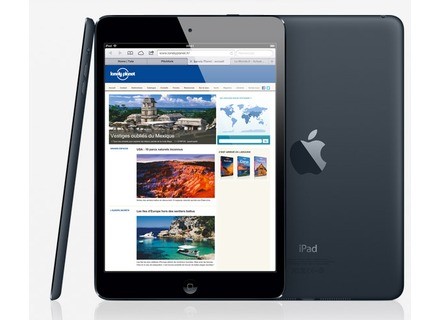 iPad mini, Touch tablet from Apple in the iPad series.

Apple introduced the iPad mini, a new iPad design that is 23 percent thinner and 53 percent lighter than the third generation iPad.

iPad mini comes in a new aluminum and glass design that is 7.2 mm thin and weighs 0.68 pounds. The 7.9-inch Multi-Touch display delivers the same iPad experience as other models, in a design that is designed to offer 35 percent more screen real estate than 7-inch tablets and up to 67 percent more usable viewing area when browsing the web, according to Apple.

iPad mini features dual-band 802.11n Wi-Fi support for speeds up to 150 Mbps, which is twice the Wi-Fi performance compared to previous iPad models, according to the company. iPad mini is available in Wi-Fi + Cellular models which feature built-in support for wireless standards, including LTE and DC-HSDPA. iPad mini data plans will be available with no contract so you can sign up and activate service directly from your iPad. The Personal Hotspot feature means you can share a fast cellular data connection via Wi-Fi, Bluetooth or USB with up to five other devices such as MacBook Pro, iPod touch or another iPad.

iPad mini and fourth generation iPad both feature support for the Lightning connector that is designed to be smaller, smarter and more durable than the 30-pin connector. Lightning connector accessories are available to support cameras, SD cards and VGA or HDMI digital video. Existing iPad Smart Covers and the iPad Smart Case are compatible with fourth generation iPad, and new polyurethane Smart Covers custom-designed for iPad mini are available in pink, green, blue, light gray, dark gray and red for $39.