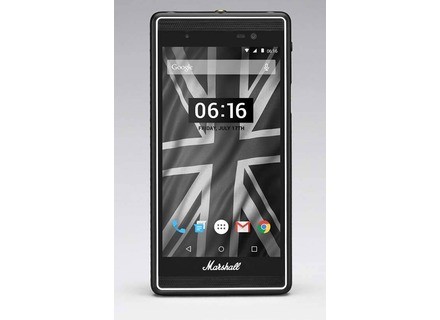 London, Touch tablet from Marshall in the Lifestyle series.

Marshall designs its own smartphone

Marshall introduced yesterday during a special event its very first musician-oriented London smartphone based on the Android OS.

The Marshall London is a real smartphone, equipped with a Qualcomm Snapdragon 410 1.2 GHz Quad Core CPU, 2 GB RAM, a 4.7” multitouch display, the Android Lollipop 5.0.2 OS, Wifi and Bluetooth 4.1. It can be used on GSM, 3G and 4G LTE networks and you can insert a micro SD card and connect it to your computer thanks to the micro USB port. Two cameras are also present, a main 8 MP with flash and a front 2 MP one. It also includes ALS, GPS, Glonass and Proximity tools, as well as an accelerometer, a gyro and an E-compass.

What makes London different from the other smartphones is that it includes two 13 x 18 mm front speakers with a volume wheel, two MEMS microphones with noise cancellation so you can record in stereo, two 1/8” headphone outputs each with their own level control and a dedicated Wolfson WM8281 Audio Hub sound card that allows for reading high resolution MP3, FLAC, WAV and more files. You’ll also find a special M button that gives direct access to music apps, no matter what you’re doing. Last, special music apps are included, among them a global EQ with presets that can be called by pressing the M button.

The Marshall London features the same finish as the Marshall amps and will ship with the Mode in-ear headphones. The smartphone will be available starting from August 17th in Scandinavia, UK and Baltic and on September 29th in Germany, France, Italy, Belgium, Spain, Switzerland and Netherlands. You can pre-order it now for 549 € at www.marshallheadphones.com. Marshall will offer the 800 first purchasers a pair of Monitor headphones, a 199 € value.