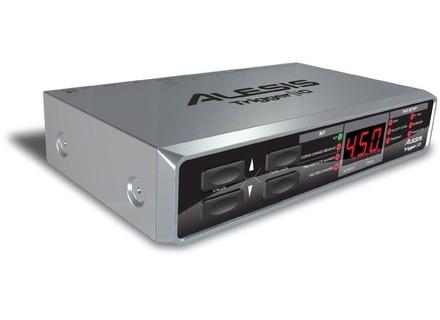 View other reviews for this product:
Owner of a yamaha DTXpress3, I wanted to change my kit by adding various elements (toms, cymbals). But is limited by the number of input jacks for DTX, I hesitated between having to sell my module against another, more advanced in Roland (TD10, TD12 or TD20) or add entries via a module I / O. My choice was mainly made in the budget (100 € the trigger I / O used against 500 € for the TD10)
I find myself now with a drumkit with 19 stereo inputs, instead of 9 entries initially with the module Yamaha, and all for a minimal expenditure.

This module is highly configurable for each input, it accepts both pads Piezo / Piezo the piezo / switch (type cymbal "choke"), Charley in continuous assessment. It must still pass a little time to configure it to reach a proper result.

Be careful though as the trigger I / O is not fully compatible with all elements of the contract:
3-zone cymbals (the module does not emit any type rating for the cymbals Piezo / Switch hit on the side);
no possibility of creating an offset to distinguish a rimshot of a cross-stick (for owners of Roland pad). This problem can be circumvented by a remapping noon, via a computer;
there are also some incompatibilities with other elements Roland, but I have not had the opportunity to test.

Despite these flaws, the Trigger I / O accepts carefree all elements that come before him. Its flexibility and price make it the most valuable module for producing electronic kits and inexpensive pro quality.

For example, my kit connected to the Trigger I / O + DTXpress consists of 6 pads mesh DIY stereo, 4 cymbals, 2 and 2 Yahama surge "chokable" and a hi-hat controller with Pintech Visulite HHC RYC.
Everything is plugged into computer with Superior Drummer, and fully functional.