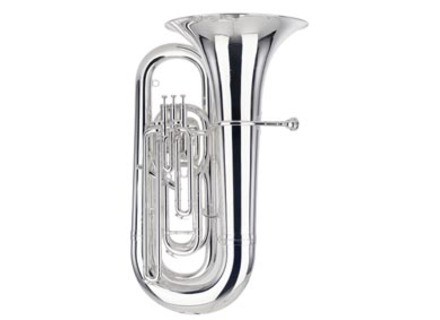 As my review's titles states, I consider the Besson Soverign to be the ultimate BBb tuba. Technically a 4/4 scale instrument, it nearly large enough to be considered 5/4 (oversize), so I would recommend this for a similarly large scale player. I played this instrument when I was an athletic 145 lbs. and 5' 10" and would recommend this instrument to someone of similar height. The tuba has four valves, but unlike the one pictured, my Sovereign's fourth valve was upright next to the other three valves. The tone is very sweet yet bellowing, with correct breath control this tuba can easily fill up an auditorium.

The valves and slides all provide excellent response. A straight-mute is also available for this tuba for jazz music. When I played it regularly, I performed both wind ensemble and jazz music, and I felt this instrument excelled at playing both.

This tuba really is in a class by itself, as it is a BBb tuba, yet usually this level of quality and workmanship goes towards producing concert and Eb tubas. The only negative aspect of this instrument is its high cost, but that is a tradeoff to being such an incredible instrument. This tuba was instrumental into getting me into college in spite of relatively poor high school grades. With it I played at the district level and was asked to audition for the all-state band, but unfortunately, due to some health complications, I was unable to achieve the level of success that I had hope. I can assure the reader that this has nothing to do with the quality or merits of this tuba.

This instrument was purchased from Dillon Music in New Jersey. If you are a tuba enthusiast and are looking for a great tuba, I highly recommend paying them a visit, as they have a large inventory of tubas.
Did you find this review helpful?yesno
Cookies help us improve performance, enhance user experience and deliver our services. By using our services, you agree to our use of cookies. Find out more.