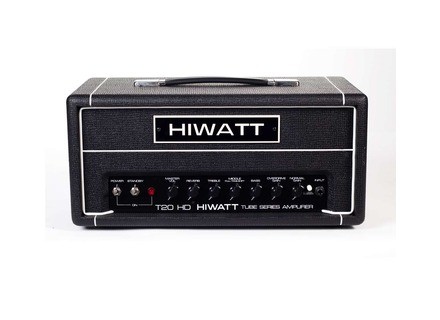 Value For Money : Excellent Audience: Advanced Users
An excellent amp with a clean, very versatile sound.
The settings (and especially the EQ) allow you to really carve your very own sound. However, it’s not a channel strip and the amp still has its own sonic identity.
True to Hiwatt’s reputation, it reacts very well to all sorts of pedals.

The 20 watts really can be heard! REALLY! Paired with the Hiwatt HG112 cab, it provides a very coherent ensemble with a really great projection.

The complete set of inputs and outputs make it a Swiss army knife of an amp, especially for studio use. By the way, each and every studio should have such an amp head…

As to the second channel, it’s very disturbing. It’s an overdriven, almost fuzzy channel. A very buzzy saturation, not in the “slightly saturate” range!!
I personally liked it, but it’s not the kind of channel to provide you with a pleasant tube overdrive, it’s (too?) much typical.
So, I had ended up buying a boost to use with the clean channel so as to warm it up. It works very well, but provides a huge output level!!

I’ve tried many an amp before buying it, and chose it for its “I’m gonna be able to play everything with it” side. However, the settings take time and effort to find your sound (the EQ control is very sensitive).

I finally sold it as i twas too versatile for me, and also not enough “plug and play”.
But each time I’ve compared it with other amps, I’ve found it awesome!
Did you find this review helpful?yesno
Cookies help us improve performance, enhance user experience and deliver our services. By using our services, you agree to our use of cookies. Find out more.