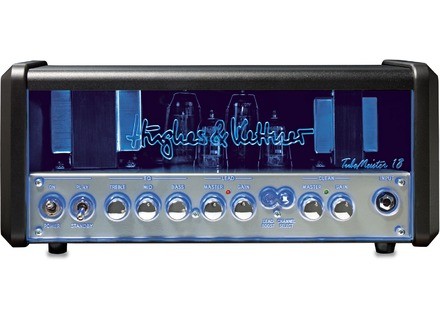 View other reviews for this product:
With all these manufacturers getting into the compact low wattage amp game, I figured it was only a matter of time before Kettner got into the fray. But this company always seems to do things their way. They prove that they can take a good idea and put their own German spin on things.

This is a small buy fairly well featured amp with an effective 3 channels and power reduction feature for low volume use. It also has the timeless Kettner Red Box on board and ready to go. El84 power tubes of course. On paper this looks like a pretty versatile amp.

The footswitch makes things simple enough. There is an FX loop which is a nice thing to include for guys like me who almost can't live without one. It's not that hard to dial in, the controls are pretty elementary. I haven't had mine long but if my previous HK products are any indicator this thing should be able to survive a 50 foot drop. The tubes don't need biasing...nice to know. Overall I have no complaints here. My footswitch works well. The weight is where it needs to be.

The clean channel doesn't break up much from power amp cranking unless you are in a low watt mode. Kettner designed it to work like a Mesa clean channel and rely on preamp gain. I'm not a big fan of these kinds of clean channels but it sounds good enough for me. Kettner is not really known for their amazing cleans. if you want that get a Vox or Blackface. The lead channel is very hughes and kettner. Kind of like a Marshall meets a well mannered Soldano. Those of you who have played a Duotone will have an idea what I'm talking about. It's a pretty refined lead sound. The boost channel is obviously for liquid amounts of gain and it's voiced for heavy rock. Sometimes it can be a little out of control. But to other players this is desirable. Maybe I'm old fashioned.

Time will tell if these catch on and compete with the likes of the Tiny Terror and the newer Mesa mini rec series. Some say this market is overflooded but I've tried most of the 18 watt offerings and this is a very appetizing entry for someone who wants all the channels covered. I really like mine and I'm gonna hold on to it and sell my Mesa mini rec I just got.
Did you find this review helpful?yesno