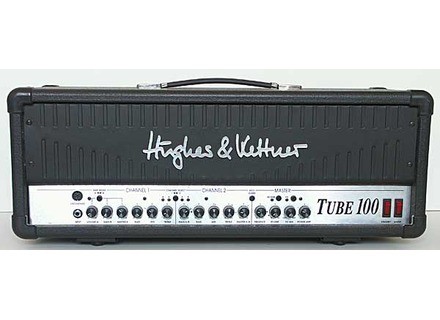 The all-tube TUBE 100 amp head is equipped with four Ruby EL34 power tubes (manufactured by SVETLANA), which gives it 100W of power. I replaced these four tubes with ELECTRO HARMONIX EL34. It also had three Sovtek 12ax7wa, which I replaced with Electro Harmonix 12ax7EH.
The amp head features two channels, each of which can work in two different modes (A/B mode), an EQ (bass,mid, treble) per channel (two EQs that is), and Presence for both channels. The reverb (with Accutronic springs) is common to both channels.
The effects loop input can be attenuated 10dB to adapt it to all multi-effects and it also features a DRY/WET balance accessible on the front panel of the amp head. The output with speaker simulation is in XLR format and features the circuit of the celebrated RED BOX (a well-made speaker simulator). There are three speaker outputs for different impedances or to use two speakers.

Clear user's manual. The amp is rather easy to use and comprehensive.
The EQ is effective and allows you to shape your own sound. This amp is very versatile.
The footswitch allows you to switch channels, change mode and bypass or not the effects loop.
The two channels + the two modes give you access to four very different sounds accessible with your feet.

It's time for the SOUND now.
On channel 1, in A mode, you get an excellent, very bright clean sound, with a nice warmth and powerful attacks (Fender-like). The sounds are nice and shapeable. In A mode there's no gain, so no distortion.
On channel 1, in B mode, you get a crunch sound the first half of the gain knob's travel and then a moderately distorted tone with the gain cranked all the way up. It is really melodious with effective mids. The EQ does its job all right. It has that really thick tube sound that no solid-state amp can imitate.
On channel 2, in A mode, it produces an AC/DC-like distortion (in terms of the distortion rate) with an awesome tube coloration. Nice lows, quality mids and highs just like they should be (no veiling of the high end, like is often the case with certain amps). Plus the EQ on this channel is very effective.
Channel 2, in B mode, is for real metal sounds. From Van Halen to Slipknot and even death metal. It's mind blowing. The sound is full, round, plump, grating, while preserving the attack and intelligibility of each note. The lows are very present, the mids can be pulled back or brought to the fore thanks to the EQ: The sound recalls a Mesa Boogie, to give you an idea (but the tone is still different).

A well-equipped and versatile amp head with killer sounds (from pop music to metal). And, on top of that, it's sturdy (it's German).
Not too expensive (especially secondhand).
I wouldn't hesitate to buy it again.
There are surely better amps, that's why I give it 9 out of 10 points. But I'm sure you will understand the difference between my H&K and amps that cost three times as much. Especially considering that owners of Mesa and 5150 amps think that I have an awesome sound with my H&K.
Did you find this review helpful?yesno
Cookies help us improve performance, enhance user experience and deliver our services. By using our services, you agree to our use of cookies. Find out more.