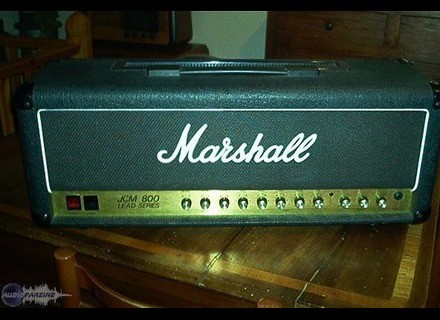 View other reviews for this product:
It's an old Marshall 1987 JCM800 a two channels. 100 watt, with peak 150w thoroughly. An effects loop and a DI output.

For what I do, I play on how "boost" which is saturated sound. The volume of my guitar allows me to move to a clear sound.

Simple setup, the sound is the volume (meaning that the amp does not sound pushed not very good). A real Marshall difficult to operate at low volume attenuator off (I, SPL reducer). Excellent sounds are obtained truly versatile

The amp suits a lot of style. It has a different sound from 2203-04 and many people prefer it. The effects loop is a more sacred if a delay and chorus just to play 80's on food.

I use different guitars (Telecaster, Les Paul, emg in duncan, ...). In fact I like to play with just the amp overdrive to magnify the sound. The sounds I get are .. Marshall. To give you an idea, listen to Michael Schenker's recent live. He plays in 2205, so the 50w. The sound is exactly that!

I traded my Mesa Rectifier combo against head + 2 December 'vintage Marshall. I do not regret at all, since the amp is more my style of game very 80's. I like his side plug and play, not need 36 effects for a versatile thing, it really is a killer amp. Amps I've tried a bunch and it's this one that I like (for now!)
See the source
Did you find this review helpful?yesno
Cookies help us improve performance, enhance user experience and deliver our services. By using our services, you agree to our use of cookies. Find out more.