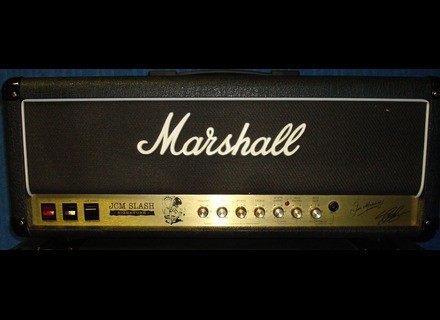 View other reviews for this product:
For the record, the 2550 is a jubilee anniversary model of the 80s (I think ...) and is considered one of the best marshall amp. 2 Slash owns one of which was pretty damaged during a riot at a concert of Guns N'Roses. So, Marshall has released a new edition of the jubilee limited to 3000 copies worldwide: JCM Slash.

Good in the characteristics is a super simple amp, it has not really need the doc ...
This is an all-tube amp two channels: a marshall in the state of the art!!

Ah is a hyper little thing important: this amp is handmade!! It's very upscale! The quality of manufacturing, component and assembly is truly impressive

Front: 3 buttons on the left, the power, the stand-by and a button that lets you toggle between 100Watt and 50Watt (attention be fo-stage by forthe do!) Basically it's been working 4 lamps or 2 lamps power! So it changes a lot the grain of the amp ...

In terms of the settings is very simple: gain, bass, mid, aspen presence, output gain, master.
2 knobs are push-pull: one to change channels and to change the grain and have a clear channel to the JCM800

At the back is classic: 2 HP, an effects loop, footswitch jack and voila!

Very easy to use but be careful so the settings are hyper efficient and therefore this type of amp EQ and super important and changes the sound completely.

Overall everything works perfectly and I love: there's no 50 buttons! is simple and effective. And above all fo understand that the sound palette is very wide! This is not the number of buttons that set the width of the sound palette!

the negative point that I would like to change: is there a single EQ for 2 channels! but hey it's like that with Marshall for years (except the last amps) so fo do with it.
And anyway with this amp you put yourself on boosted channel and if you want a clean sound you lower the volume of your guitar and you're done!
I put 9 because I can not regard it as a default: this amp is a reissue so they would not necessarily change everything ...

I'm in love with everything about this amp. the clean sound, the crunch and saturated. You can do anything with.
This is the perfect base!
you want a bigger sound: you add a tube screamer, a compressor and / or equalizer

Already the basic sound is huge and the most enjoyable thing is not to push the gain on the bottom but kind to 6 / 7 and you decrease the volume of the guitar. here you have a crunch / clear beautiful as the attack on the pick: I love it!

In general it is the sound marshall par excellence: very rich and malleable can be anything you want. When the amp is set to the sound palette is in the fingers !!!!!

It's been a little over a year since I have it. I was lucky to find one of OCCAZ and really it's great!
I tried a ton of head marshall before: JCM800, JCM 2000 and my choice was stopped on the JCM2000 DSL50 which to my taste was the one that sounded best!
But I came across an ad for a JCM Slash and frankly I do not regret one second my choice!

It is not easy to find OCCAZ and the price is around € 700 is very good! Of course if you get the jump on the original jubilee is extremely rare and it is the most sought after amp marshall!

if you want further advice here is the link to harmony central (in English) where a lot of people gave its opinion on it, and everyone agrees: this is certainly one of the best marshall! !
http://www.harmony-central.com/Guitar/Data/Marshall/2555_SL_Jubilee-01.html

No need to tell you that I do it again this choice with eyes closed!
See the source
Did you find this review helpful?yesno
Cookies help us improve performance, enhance user experience and deliver our services. By using our services, you agree to our use of cookies. Find out more.