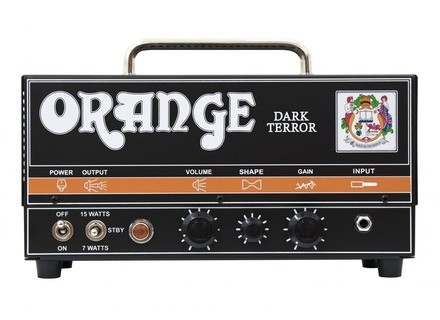 Buy this productView price information >
View other reviews for this product:
For the size of a lunch box this little amp pacts quite a kick to it. This amp looks like something you would walk to school with and be carrying your peanut butter sandwich in. Orange has taken such a small but positive approach to lunch box style amplifiers. There seems to be a trend going on with manufacturers hitting a market that seems like a good entry way into their flagship amplifiers.

The amp has that familiar British grind that you found in the 60's and 70's went they were the leaders in getting high gain sustain from their guitar rigs. This little box does what a full stack can do in a pint size proportion. It sounds fantastic and gets chewier and smoother as you hit it harder with more volume. This amp is the same spec as the original tiny terror but just in a black amp casing. Same great tone as would imagine and the fantastic new look.

Class A Switchable between 15 and 7 watts
Valves:

Though the Orange amps have a familiar British flavor to them I think that anyone would be surprised at how big and bold the tone is from this small box. Though is is rated at only 15 watts it gets quite loud and will accompany most small clubs or gigging situations quite nicely. There is no compromise of tone or quality in this amp. Is sounds as huge tonal wise as any of the larger more frequented amps that Orange makes.

Many manufacturers have now saw the overwhelmingly positive result that Orange got from this and are now doing the same thing. Mesa Boogie released one last year as well as Vox. Hughes and Kettner is releasing one this year and you'll see that in the trade shows real soon. There has been an untapped market for these little light weight but heavy punch high gain amplifiers. I would recommend this amp to anyone who needs pint size amp with a kick. At new these amps come in at a round $650. Great bang for your buck in these harsh economic times.
Did you find this review helpful?yesno