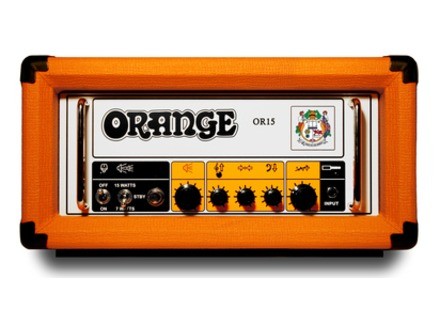 OR15H Reissue, Tube Guitar Amp Head from Orange in the OR series.

Buy this productView price information >
View other reviews for this product:
This is an all-tube amp 15W (EL84) manufactured in China by Orange.

The settings are very simple (Master Bass / Medium / Treble, Gain).
Compared to the "Terror" family he deserves to have a cabinet worthy of the name (no toaster) and an effects loop tube.

For a 15W he has chest! This is not an amp to play at home but for small concerts.

The config could not be more simple. A volume, a gain and a conventional EQ. And 15W/7W switch (useless by the way)

The connection is simple but effective:
- Instrument Input
- Connections for speakers and 8Ohms 16ohms
- Effects Loop

The manual speaks mostly lamps and their use. Might be interesting for a first purchase of tube amps but otherwise this type of device does not need a manual.

This must be done on purpose to get a bad sound with this amp (subject to have a good speaker to go with).
For me, the max volume, EQ and gain around noon for MIDI and go!

Headroom of this amp is awesome. My style (blues / rock, hard rock) is more than enough and even more.

I play mostly with Les Paul equipped with copies of PAF.

The sound is fat enough (some legacy Orange). The stamp is very nice, especially for an amp of this size. With everything at noon, immediately "Still Got the Blues" by Gary Moore. By lowering the volume of the guitar you get to the Led Zeppelin and virtually AC / DC still dropping a little.
Not really clean with this amp but it might be expected given the headroom and power.

So it's very rock from beginning to end. This really is a great little amp that does not blush beside my Metropoulos that costs more than 20 times its price! The only complaint we do this is rather important compression. But it is to be given to only EL84 amp itself. I'm used to a JTM 45/100 with 4 KT66 so it's normal that I lack "something" at the attack and dynamics.
Nothing catastrophic and besides, I think many will appreciate the natural compression of the amp.

I only gripe I have is the sound slight crunch ("edge of breakup") which suddenly lacks a bit of character. It does not really feel the notes "explode" but it's more a question of feeling than his. Registered, it is much less obvious.

For the big crunch is excellent and very enjoyable to play.

Edit: After replacing the preamp tubes (NOS January 5751 in V1 & V2, NOS January 12AT7 PI) is much better (for what I want). The grain is more open and found the attack dynamics. Less gain in overall but it's still more than enough and it allows you to use the gain control over a large part of the race. Now it's AC / DC and Led Zep in a mini head! I recommend the change. The original JJ are good but they have a bit too much gain for my taste. For classic rock and blues rock, now is almost perfect with greenbacks.

I've had two weeks but I've played a small package of hours.

I hesitated a lot before taking a 15W and above with EL84. The aternative was a Germino Lead 55LV. This is not the same price or the same weight or the same power. Actually the EL84 not compress poorly sound (a bit too much for my taste) but this does not prevent the amp to be very good especially for the price. It's almost ridiculous compared to the result. And Chinese manufacturing does not mean anything. It is clean and well finished. Lamps are JJ, which is very honest.

If I had to choose again a 15W EL84 I certainly would resume this amp.
See the source
Did you find this review helpful?yesno
Cookies help us improve performance, enhance user experience and deliver our services. By using our services, you agree to our use of cookies. Find out more.