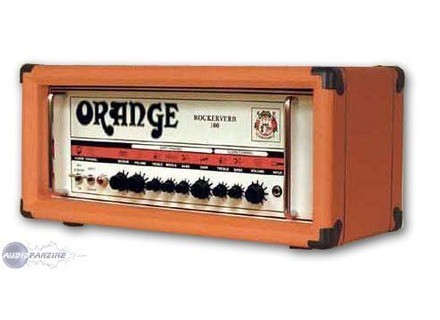 View other reviews for this product:
- All Tube Amp with the possibility to choose the power tubes
- 100 Watts
- Two channels: Clean and Dirty
- Reverb common to both channels
- Footswitch (s) (not supplied) for channel switching and reverb
- Spar EQ for each channel with a gain knob for the distortion level of the canal Dirty

The grip and are rglages could not be more simple and we obtain the DSIR's very easy. The clean channel is sublime claret and precision when the channel is to die so dirty it's good. It's going to crunch the most distal muscles the hard
The manual is readily available on the Internet, but frankly is not essential

I play the principamement Rock / Blues as well as the Hard and pop and is the amp I wanted. I use it with a Gisbon Les Paul Studio and a Strato and TV and in three cases the sound is to go. I absolutely love all the sounds you can get out of this amp. I plug a 2x12 cabinet Orange (PCC212) on the head and the projection of sound is standard

I only last month but I know that dj I can no longer do without. I had other pre amp (Fender, Marshall, Musicman) but this is what I expected. Report qalit execellent prices especially since I bought it in www.dv247.com in England and for the price in stores I won about 1300 Euros over the entire cabinet + Tte.

The major inconvnient this amp? THE WEIGHT!

The only ngatif: The rverb ... Pretty bad, too, and this same effect with the minimum level. I put a for only 9

If I had to buy a deuxime amp, I would resume the same without hsiter.
See the source
Did you find this review helpful?yesno
Cookies help us improve performance, enhance user experience and deliver our services. By using our services, you agree to our use of cookies. Find out more.