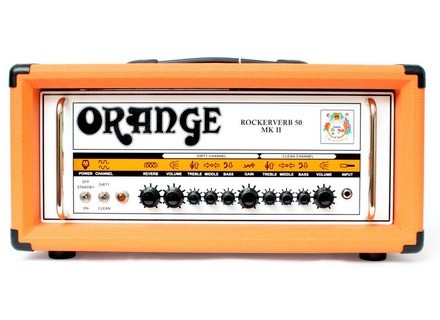 View other reviews for this product:
The Orange Rockerverb 50 mkii is a twin channeled, el34 based design with a great classic sound. Featuring a redesigned, tube driven reverb unit and effects loop. The amp also possesses a bias switch on the rear panel if you want to swap out the el34 tubes for kt88's. Classic Orange tolex gives the definitive look.

Having the ability to engage the reverb via footswitch is a great feature. The Rockerverb is a very simple amp and as such, is not difficult to dial in. Unlike Mesa boogie amps that take lot of time to find a sweet spot, Orange's sound proper just about anywhere on the dial. The tone controls are very responsive, with low and high-mid eq controls attached to the treble and bass. Build quality is rugged, as to be expected from Orange. I know many people out on the road with Orange amps and I've never heard a complaint regarding reliability.

I played through the Rockerverb with a 70s Gibson Les Paul Standard. Orange 4x12. No pedals.

The clean channel just sparkles. Of all the Orange's I've played, the Rockerverb mkii's clean channel is my favorite. It is a warm, full sound that's very signature to Orange amps and seemingly refined in this particular model. Conversely, I was less than impressed with the Rockerverb's dirty channel. Compared to the AD30, it just sounded dull. The onboard reverb was tasteful but lesser in sound quality to other amp's in the price point.

The Orange Rockerverb mkii retails at $2149 new. In this price point the Orange is weak competitively. Amps like the Bogner Goldfinger and the Reeves Super '78 dominate it. Even Orange's own AD30 faired more favorably in terms of rock tones. Is it a decent design? Yes. Is it worth the price of admission? In my own opinion, no.
Did you find this review helpful?yesno
Cookies help us improve performance, enhance user experience and deliver our services. By using our services, you agree to our use of cookies. Find out more.