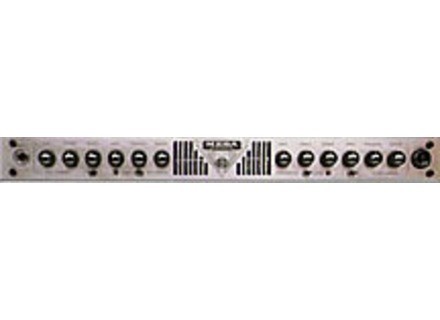 View other reviews for this product:
It is a prampli two 12AX7. two channels with each channel 3 vocing
in clean, digging + or - mediums, and in full, a blues, a leader and grunge.
+ A mixed mode that allows you to balance the mix of the two channels clean / saturated
(Usable for sound levels / solo / saturated / clean).

Rear face:
between instrument, effects loop with adjustable level knob 1, (1 dpart, Stereo Return)
+ 1 switch control loop.
There are two outputs that control a stro same knob (not of its 5 db, which is extensive)
THE FIRST gross output lamps (very crystalline)
the second called tuned through a simulation of HP for recording (test)
or on a console for live (I will not date because test group)
on my rack, this second release sounds more medium then tested in concert tonight.

I forgot the headphone output Stereo enough but it is relative and to the funk and blues
was possible to work in silence ....

I have the option of ordering from 6 pedals voicing switch with a mono jack while bte
it can be trs INTERESTED ... and settings for MIDI switch occasionally.

So complte interface trs. a score of Max ...

For the grip is the mesa boogie so it trs sensitive, especially concerning the interaction between
the gain / treble / prsence (read about the manual in English which explains the philosophy of the machine)
One could blame the lack of channel saturated in brightness or losing the attack by climbing the gain over the halves: this dpend other lments (amp lights or not, HP utiliss and on what
output prampli attack on the amp, and especially the guitar ....)

I found my lead sound (which harmonizes well) a good half hour APRS research (be patient, it's not a Fender hotrod that sounds good alone, but that sounds the same for everyone ... ), I prampli for 3 days and I am far from having made the rounds. on the other hand, it is only since last night that I believe have made the right choice before, sr j'tais not find the sound I was looking for .... and say that I feel reassured but I have not yet found the top of this prampli! respect ....

In any case, try playing a few pots of milimtres is the only all happens. A deprecated and therefore to question its nvross, to mtaleux is not the best tool for this, for against, it does everything else.

Question sounds, see above. I play a fender tex mex team of 3 + TBX active EMG single
for "approach" the clean sounds Gilmour.
I did a concert Saturday, using the raw output on my Marshall Valvestate 8008
and a baffle 1922: rsultat: trs crystal clear sound (almost too) and leads mals but not too
HIFI.

I redid the tests using the output simultaneously with the same config HP:
clean sounds closer to a lamp type amp twin / vox
saturation on the voicing sounds too mdium lead and too dull.
So I tried voicing the grunge with a lot of gain and has done, I win a lot
DEFINITIONS less in low mduim and brightness: it is not Steve Morse
or solo Marillion but it rappproche well ....

For the record output simultaneously HP, guitarist whom I bought the prampli
found out that this was a sound "crap" like this, it's all subjective trs trs!

My test result in concert (outdoors) I note the rise rvise my knowledge that the rglage
is more clever and difficult to find as a group.

I find that really ensures clear sound, I love
sound mix of the two channels for solos, gave a prsence apprciable trs, even
if the sound ncessite a time of adjustment. For heavy distortion, I think still missing
prampli of experience on this because it flies to a lack of brilliance in the riffs sound too fast
sour. Good also say that I get out of a peavey RockMaster that saturates are immediately
large sounds hards ... you can not have it all. on the other hand, mlodiques for solos and blues
it sounds really good. A small question mark therefore remains on the end of rglage
saturations. For the rest, prsence and big sound, even playing in paint air.

Used for a week:

This is a high-quality manufacturing, connection, look great and sound of course!

APRS a second concert (in air paint), I comfort my perspective, it's like a jaguar
or a Harley, the machine must tame: DIFFERENT voicings test situations, refine rglages,
but of happiness if you like good classic rock sound and effective or rhythmic
well slamming funk ...

ZAzman
See the source
Did you find this review helpful?yesno
Cookies help us improve performance, enhance user experience and deliver our services. By using our services, you agree to our use of cookies. Find out more.