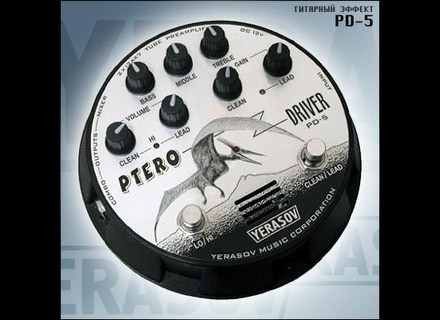 the pedal is very classy, ​​aluminum on top!
it weighs, we feel that it is not fake
Everything is there!
the sound will depend largely on what you put him behind! (eg speaker, and then power amp as well)

I did not even look at the manual, there is no besion!
-The sound is at once in crunch rhythm and lead
-In short, it is less obvious! (Along with a bc-rich emg ....), in the equation is effective in lead, but less clear ...
I just noticed that the equation is interactive!
it works like a front!
First the gain, then acute then the midrange, and bass!
A lot of sound, how lead trash to lead the last 80 years!

4 channel preamp!
-A rather clean way because too loaded medium!
I did a test on a 50 mg dfx!
on the other hand, coming out of a 4X12 correct, the clean was much better!
Music soft-crunch, with fat and grain, very nice mids
-Rhythm, although dynamic, the pedal has a barrage of bass, but very tense at the engl (Here the equation and play its role very well, lots of sounds available ...!
Its lead-Perfect Pretty close to a 5150 with the grain still in mediums that kills!
with an EMG, I have a huge gain as much as on the front, but with more midrange!

For now I tested it on a transistor amplifier, without setting a valuable is the presence!

I am thinking that was the deal of the century for those who want crunch and lead that kill!

I define the lead:
Very dynamic, much as a engl e520 for example (I've owned)
Less compressed, and the media much more alive and expressive
Are powerful and the treble give a cutting edge which makes palm mute real enjoyment!
Huge bass, I remember almost as much as a correction, but more tense!

the only repproche I have to do is the clean that did not seem to be at the height of the other sounds! (but hey, I recall that I have a bridge in emg)

I would further test with a clean boost, through the power stage of my roadster, change louppiottes to see ....

I test the simulation hp verdict in the forum section, there are samples .....

150 euros for up to four sounds great and good that needs to be worked!
A look I like it strong!
In short, I adopt it without worry!
with an amplifier that has a presence control, it must be divine ....!

I have yet to test the simulation output with HP ...
see you soon for samples!

The samples that I made, I take comfort in the feeling that I had by connecting for the first time!
a big slap in hi gain!
it sends all That a front or a 5150!
The next sample, I'm back with the mic 4X12 correct!
And as it bore mediums, compresses the sound while providing more dynamic sound, I already know it's going to kill!
Almost no wind, for it heats against a lot!
it's really a case this small preamp!
See the source
Did you find this review helpful?yesno
Cookies help us improve performance, enhance user experience and deliver our services. By using our services, you agree to our use of cookies. Find out more.