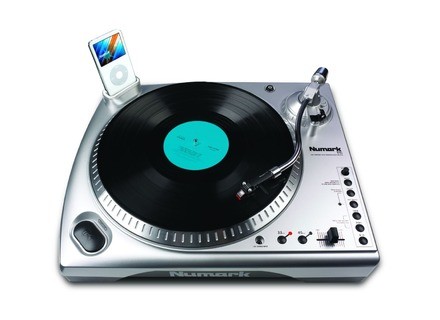 TTi, Turntable from Numark in the TT series.

Since I started getting into Djing a few years ago, I have used a lot of different tables. For some guys, they're our bread and butter. Other DJ's find them to be obsolete or gimmicky. I'm kind of in the middle there. I understand a lot of people buy this as a tool to use for transferring vinyl records to an ipod. I can personally say it does this pretty well, even though that's not the main reason I bought mine. The only issue is that Numark doesn't list any audio specs, so who knows what kind of converters are being used. I mean it's a pretty cheap table so there's no telling.

Anyway, I bought this as my first DJ table without any real idea of how I was going to use it. Apparently some people use Traktor and have this running as a software controller but I never got into that. I literally just ran all my samples into it using whatever I had at the time and through the phono outputs to a mixer. In this respect it works well. There's not much to screw up really. Not a ton of buttons. It's a scratch table. But the real question is how well it works.

Probably the best thing about the TTI is that it's an actual turntable and not a modular unit. If you are someone who doesn't like having to go through a software interface with your needle, this is probably the best deal out there. There's really something to be said for having an actual record on the table and getting that raw vinyl sound. Now to be fair, this isn't anywhere near the best table I've ever spun on but it was my first table so I still have a fondness for the feel of it. I actually don't think this was designed with a lot of scratching in mind. It seems like Numark really intended this to be a recording unit and simply that. But for my DJ uses it has been great. Well was great, I have since upgraded but I can highly recommend this unit to almost anyone. No matter what the need.
Did you find this review helpful?yesno
Cookies help us improve performance, enhance user experience and deliver our services. By using our services, you agree to our use of cookies. Find out more.