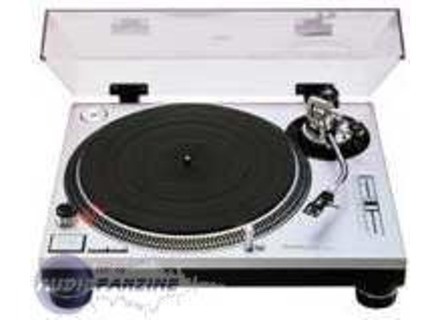 « Technics turntables will never let you down! »
5

View other reviews for this product:
Most of the Djs you can see in the clubs, consider the Technics 1200 mk2 as one of the best turntables a music enthusiast can have. If you are starting to learn the basics of this amusing profession, there is no doubt that the technics products should be more frequent in the learning process. The 1200 mk2 version was dealing with a few changes since its first release in 1972, and its developers have made a fantastic turntable, which became a trademark in the hip hop culture because they were using it as an instrument. One of the notable advantages, is the weight of this turntable, which is 31 pounds. Yes, it is unusual for a turntable to weight as much as this, but it is a characteristic that provides a better sound quality since it is absorbing the vibrations from the speakers. Besides the marvellous weight feature, many users are disappointed in the lack of pitch adjustment beyond 8% and its developers aren’t willing to change it, even when some of the competitions were offering a better pitch adjustment. But, the ability to avoid any change of speed is on the highest level and the beatmatch will always be on point.

Technics 1200 mk2 is the default music tool for almost every respectable DJ today, and even if it is amazing for the clubs, it can still do an amazing job in the audiophile world. The people, which are involved in the world of sound and pay an extraordinary level of details when it comes to achieving the perfect sound, are satisfied from Technics 1200 mk2 and suggest it to everyone who has doubts about it. There won’t be any rumble problems with this turntable because of the quality creation and weight of the product. Every DJ would have issues in the clubs if rumble and instability appears. Maybe one of the most important parts of the turntables is the tonearm because it's crucial when it comes to having a great sound. Technics weren’t developing a new tonearm for this turntable and it is an outdated feature that is not a good thing for the audiophiles. So, if you purchase a second hand Technics 1200mk2, you will need to change the tonearm if you are interested in a better sound.

A creation that is built to last has never failed the people who follow the work of Technics and some of the characteristics can’t be found in other turntables. Having the ability to make a quick start-up with only 0.07 seconds, is an amazing feature to provide in the 70s. The torque motor is making a huge difference from the other turntable companies. The authentic moulded aluminium Diecast cabinet and heavy rubber base material keep the product undamaged. All of the vibrations a regular turntable has, can’t be found in Technics 1200 mk2. Today, used Technics 1200 mk2 can be purchased for a huge price, which is almost close to the regular price of a new turntable. The developers aren’t releasing this product anymore, so a used Technics is the only option if you are willing to have an excellent turntable in your home. Always avoid using Technics 1200 from DJs since their condition won’t be on a satisfying level. This is a very important characteristic for the audiophiles and for the people that don’t want to replace it with another turntable in a few years.


Cons:
- Technics doesn’t release them anymore
- The second hand price is almost as expensive as a new turntable
- Lack of pitch adjustment beyond 8%