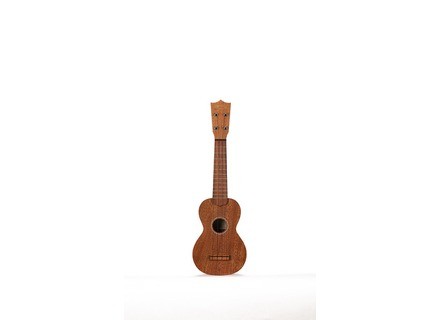 View other reviews for this product:
Uke "Made in Mexico"
Solid wood, all mahogany.
Soprano Size
12 Frets: not much, but given the size of the last fret, this seems justified ...
Excellent finish
I really like the minimalist aesthetic "all mahogany of this instrument.

Difficult for a guitarist to talk about the ergonomics of a Uke: it is small, it takes some getting used to but it comes out of music! I'm more comfortable handles for thicker (Brüko brand for example).
Easy instrument to play, good projection.
But be careful: I've played more (same model), there was a significant disparity between the instruments that came into my hands.

I chose this instrument with my ears ... After trying many Uke cheaper and more expensive, it's really the one that occurred to me to have the best value for their money.
Nothing to do with an instrument for beginners. It is very powerful, what can be found on entry-level instruments, but the sound has more "grain", heat and a lot more finesse.
Its typical uke all mahogany. Since I have installed ropes Worth Brown, he has more than sustain, even at the expense of the typical sound he had with his strings of origin (the "crystal" brand Martin I guess) that produced a drier sound.
I accompanied me on the songs of Thomas Fersen, I play in picking a few pieces, everything sounds. Mounted Worth Brown is a very versatile instrument.

For over a year since I instrument. I bought it to add another color to my performances sung, it gives me satisfaction in this context. I also had the opportunity to use in picking solo for a benefit concert, without a microphone in a 600-seat theater, the whole room took over, whistling the tune of "Tea for Two": it works!
As I wrote above, I tried many instruments, lots of brands in 4 or 5 stores in Paris. There the best: intruments luthier (Knight, for example), the former Martin made in U.S. ... But at prices of at least double it.
In the category of "less than 400 Euros (price paid: 350 Euro), I found no better at the time and the price seems fully justified by the quality of sound, flawless finish and the fact that it is an instrument "while massive, built to improve over time.
For a budget around 150 Euros, I did buy a uke Brüko two of my friends, is very good in this price category, while solid, built like a Panzer, but the delicacy of the sound is not the same. Otherwise, with a budget of 700-800 Euros, I would choose a Knight. But there is no longer in the same budget installment!
In short, I would do without hesitation if the choice had to start again. Caution, however, be able to try the instrument you choose, all do not sound the same way!