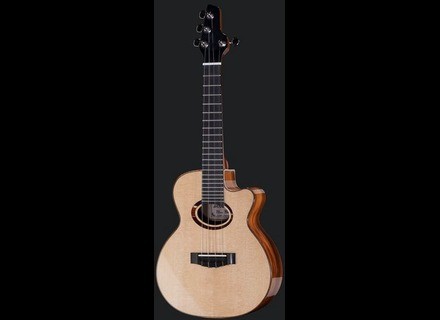 « Said it was a Tenor Scale but was actually Concert »

Value For Money : Poor Audience: Advanced Users
This is quite a pretty Ukulele. The wood inlay rosette around the oval sound hole is very well done, as the rosewood veneer on the asymmetric headstock, (that reminds me of the headstock of my Ibanez Talman). The fat deep cutaway body and the middle strip in the quite clunkily profiled neck are nice too, though possibly the body is a bit deeper that it should be? There is never a lot to say about the look of spruce, but the rosewood back and sides are beautifully grained and it's all finished off with a very… very high gloss coating. The front of the fret board is blank, though there are marker dots on the side at the 3rd, 5th, 7th 9th and 12th frets with the 5th and 12th being double dots. As I’ve said it is a Concert with a 381mm (15in) scale and while I’m doing measurements a couple of other interesting ones are the depth of the body, 83mm (3¼ in) and the width of the lower bout, 244mm (9½in) so a very big, deep body for a Concert. The sound hole label say “Hand crafted by Strunal” and “made in Luby, Czech Republic” so now I know a little more about the actual maker but it also has “Kapua” written by hand in it but I have no idea what this means? It is solid wood, (well top certainly the advertising says it’s all solid and it should be for the money, but the advertising hasn’t been entirely correct – I’ll take its word here though), and with the sound board quite thick, (3+mm). There are at least 3 bracing bars across the bottom and the top is certainly cross braced so it is very solid and if anything over braced. The build quality everywhere else is very solid too, with everything precise, smooth, clean and neat, including the fairly large enclosed tuners which in addition to looking smooth clean and precise, work this way too. The nut and saddle are not compensated and, (I think), bone; well made and well fitted though I think the saddle is a little high, a sign that it was produced in some kind of factory process as it shows a “Factory” type setup, (always start high as its easier for punters to lower the action so not set up fully at the factory). Overall when I look closely at it I get the feeling it’s been made very very well, but by Guitar makers who are having a go at Ukuleles and like the very first Martins they have made it a bit too much like a Guitar, over braced and over solid. I suspect they may also have used a Tenor Ukulele to make the body template which is why it is so big and there was a degree of confusion about what scale it was suppose to be, (the old favourite – we’re going to make a Ukulele, we need a template, I know we’ll draw round a Ukulele and use that – but they got a Tenor, drew round it and ended up with a template that was even bigger than the Tenor body? – but that’s enough speculation).

Sound wise it is very weak, very quiet, not very bright, no depth and this really lets it down! It has all the faults of a spruce top like no bass, but none of the pluses. You look at what I have said about the build and there are any number of reasons for this - depth of body, thickness of soundboard, over bracing, gloss finish, and it’s so weak I think they all contribute. The intonation is very good though, pretty much perfect on the easy string and not far off on the C, (could easily have been perfected if they had used a compensated bridge – though is still better that most Ukuleles best efforts). I think it would probably also work well if a pickup was fitted. It’s certainly strong enough to take the drilling to fit one and being so “built” it would probably be a good and reliable Ukulele to gig with.

I don’t doubt this Ukulele would last, it is very well made. But one of the reasons it will last is because it would never be the one you reached for to play. Anyone who spent this much on a Ukulele will already have at least one; and the one they already have will almost certainly sound better than this. Would I get one again? Well I’m not keeping this one and I would only consider the one with the 3 and 1 headstock that I first saw if it was a tenth the current price, (I think it’s that much overpriced for the sound!)