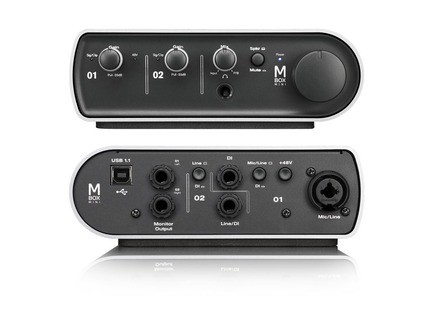 View other reviews for this product:
With my group we have chosen after testing the old version belonging to a friend.
With Pro Tools, we found a simple and quick to use to record our compositions and other generic for the webcast of our pianist. Also was one of the Mbox interfaces accessible price level, which also played. Its small size is a plus, you can take it anywhere! And the fact that there are two inputs is a feature that motivated this choice.

I plug the interface in my macbook pro (everything goes very fast). In general one branch over a microphone placed in front of the amps or voice, or digital piano online, or mixing desk on which you plug the microphone jack the battery (it is also possible to connect two tables above to mix eg separate tom mics and overheads to deal with two separate tracks via software).

Everything works on my mac nikel, ca not row, no bug of the interface, short nikel!
I use it with Pro Tools LE included with and ca enough for me (although sometimes a little software bug sometimes)
I do not know exactly how much track you can play / record simultaneously with, personally I have never registered more than two tracks simultaneously and read more than a dozen track without worry. I think it must go beyond.
I never update or proposed to do, so simple.
There to 0 latency is the direct and everything is smooth!

No installation worries, it's almost plug and play!
The whole config is simple, the knobs of the interface are mainly used to adjust the gain lines to avoid saturation or a booster. These knobs also have a "push-pull" to remove 20db, practice!
No incompatibilities with my mac, everything works.

I use it for almost a year (end 2010), and my first purchase of its kind, it was tested with my band the previous version that worked well too (but ugly haha).
I like almost everything of this interface, I have no complaints for the use I have!
The price / quality ratio is very good when you see the price of certain interfaces or what some have for almost the same price.
this choice I would do without hesitation!
I put 9 because it is not the perfect product, I mean judging the prize and my use.
See the source
Did you find this review helpful?yesno
Cookies help us improve performance, enhance user experience and deliver our services. By using our services, you agree to our use of cookies. Find out more.