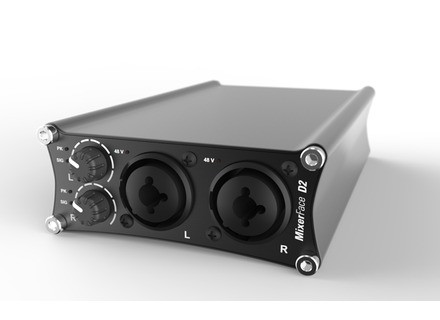 CEntrance launched a new crowdfunding campaign on Indiegogo in order to launch its new MixerFace audio interface for mobile devices.

Designed for nomad musicians who wish to record on tablets, smartphones or laptops, the MixerFace is a two-channel USB audio interface. Battery-powered, it can be used during approximately 6 hours per charge.

The MixerFace features two microphone preamps, with mic/line level inputs on XLR/jack combos, each with its own gain control and LED meter, a 48V Phantom power, as well as a headphone amp and 24-bit / 192kHz DA/AD converters.

The monitoring section allows for panning each channel and blend the dry/wet signals in the headphones.

CEntrance adds that a Hi-Z input could be added according to the number of requests. However, nothing about MIDI connection was detailed.

The interface works with both 30-pin or Lightning iOS devices.

The MixerFace should be available in April, 2014 and will retail for the US price of $599. However, the 100 crowdfunders on Indiegogo will pay only $279 and will receive their unit in March. 200 other units are available on Indiegogo for $299 and 200 more for $349. So if you participate in the campaign, you will benefit from an interesting pricing. Full details are available at www.indiegogo.com and centrance.com.