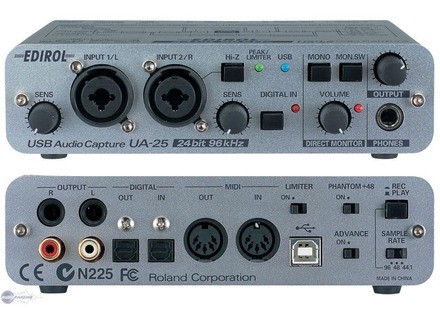 So I've had drivers galleys repeatedly but in fact I especially think we imprativement know one thing: put the advance mode ON if you are on windows !!! This small Dtail obliged me pull me many times the hair, and sometimes threw me in the shit in live performance ...

Apart from this, since it works without fuss, I can dbrancher / reconnect easily, windows finds her alone.

I never managed to record with. It is a mystery and frankly a damn m'enerve. I have tried EVERYTHING. So I recorded with my internal sound card ....

Level latency me a acceptable air but do not over rely on for processing live ...

It seems to record a stro track (so TFW 2 mono tracks) but hey, since in 3 years I have not managed to save it with ...

So did three years, and I do not know when appeared a constant grsillement damn !!!! It's amazing and only if the card is for the branch grsillement blast appears in the mix table. It is quite small but for me it is good for the Introduced trash.

Maybe it's due to the fact that I have often carries (rather good deals yet it solid but good air ..). In short unreliable.
IN CONCLUSION: A low-end card my taste. An interesting prices and good sound but its reliability leaves completely be desired. 3 years after I was obliged to change it. I have a friend who has the same and which has also galleys. In my opinion, it is better to invest in something beefier, it's more economical ...
See the source
Did you find this review helpful?yesno
Cookies help us improve performance, enhance user experience and deliver our services. By using our services, you agree to our use of cookies. Find out more.