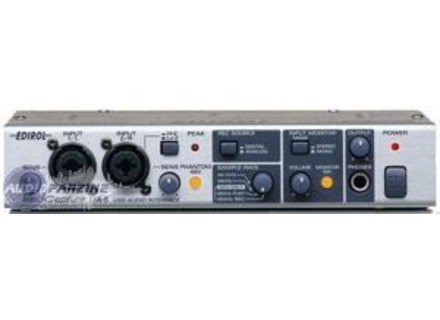 UA-5, USB audio interface from Edirol in the UA series.

View other reviews for this product:
24-bit 96 kHz input analos, digital, power famtom, coax and optical digital output, including all that is.
I use it both to record my guitar, synths or voices, and everything is super nickel, the converters are of great qualities. I also use virtual instruments, including a lot gourmants resources, and no problems, no lag or so, with the same buffer to a minimum.

I put an Adaptec USB 2.0 to connect it, and cracking is never perfect, even with 5 or 6 virtual instruments at the same time, it's really pro!

Avoid like the plague VIA chipset is not designed to record audio, that's it.

We put the CD and five minutes later you can start recording (not exaggerating!) on the other hand must at the base machine is super stable, I had to reformat it before putting the drivers.
I have not read the manual, frankly there is not need.
As for the config, just adjust the resolution and sampling frequency on the front and all rolls

The drivers are extremely stable, ASIO 2.0 and WDM too.
Personally, I used those CD's for the moment I have not seen the usefulness of patched, to see later if I need it.
I use Cubase SX and Sonar 2 XL and no discomfort, especially with Cubase, much more stable than Sonar, which is a shame given that Sonar is made only for the PC
Regarding latency, I descent below 2 ms, but the USB card I use has a buffer, which can be done as I can afford these rates.
As usually I record one track I can not say how much I can save the track at once, but easily more than 10 or 12

It's been 6 months that I have and I expect the output of a model with more rack analos to zap my mixing console.
Bon are still some flaws, but hey this is not necessarily related to the interface, but rather to win XP, so you're better interface plugée and turned the computer before running under pain of being without any sounds.
The quality / price = TOP, I do not regret my purchase, but I read many test before deciding.
Buy it back tomorrow if I do it again.
See the source
Did you find this review helpful?yesno
Cookies help us improve performance, enhance user experience and deliver our services. By using our services, you agree to our use of cookies. Find out more.