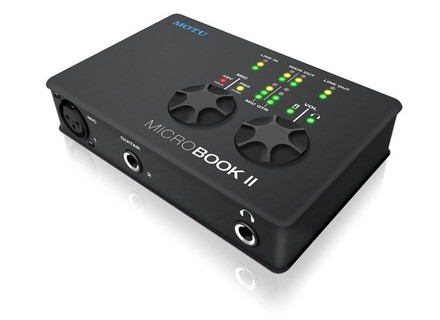 « I wouldn't take it for anything in the world »
1

View other reviews for this product:
Which technical specifications motivated your choice?
Small, portable, MOTU, Enough for a beginning.

What do you use it for?
To record condenser MICs, analog and modular synthezisers and DAW.

What's your setup (motherboard, CPU, RAM, hard drive,...)?
I have a badass monster I put together and optimized myself, I work with computers...

Do you use it with other instruments or systems (mixing console, preamp, DtD, ...) and what's your setup? ...
Focal monitors, Cordial cable, DJTT USB cable.

Are the drivers stable?
No

Are they up to date?
No

Which software do you use?
Ableton Live

What's the latency of your system?
It's useless to do automation with Ableton's Curve without having a buffer of 512 Samples; no problems with my motherboard's built-in soundcard using MME DirectX...

How many tracks can you record/playback simultaneously ? ...
I have never counted, because it depends on the gear you use on each track, but with a CPU-resource consumption above 40% it produces glitches, clicks and pops.

Did you have any problems during the installation?
Plug and Play ( ...or rather Plug and Do Your Head In)

Did you have any incompatibility problems?
Yes

Is the overall configuration complicated?
You can get easily lost with the strange options...

Is the user's manual clear and comprehensive? ...
Yes

Which feature do you like the most / the least?
The most:
The tools are great, Oscilloscope, Tuner, FFT Analyzer, etc.

The least:
The included USB cable is completely useless, it only makes the soundcard restart all the time.
USB female connector of dubious quality.
Latency, CPU consumption, it's horrible, glitches, clicks and pops without end.
The card simply can't be used with a buffer below 512 (and I'm talking about a 4.8 Ghz PC with the best components inside, and I won't to tell you how it did with my laptop...)
Live's Automation works poorly or not at all in "Curve" mode if the buffer isn't set to 512 samples in Live, but I have no problems with Directx/MME and a built-in soundcard.

Did you try any other models before buying this one?
No

How would you rate its value for money?
It's worthless, frankly, not even free is it a good option.

Based on your experience, would you buy this product again? ...
Right now, if I were to find one lying on the street inside its box I would throw it directly into the first garbage can I'd found.

A final word:
I must warn all Windows users to run from the brand, which is just worse as time goes by, the drivers aren't stable, the USB connector and the USB cable included are of very bad quality. The overall operation is deplorable.

Bottom line, unless your idea of making music is racking your brains every time, don't even think about it.

I had heard lots of good things about this brand when I started out but, to be true, I don't know where that reputation comes from.

In short, it's lousy.
Did you find this review helpful?yesno
Cookies help us improve performance, enhance user experience and deliver our services. By using our services, you agree to our use of cookies. Find out more.