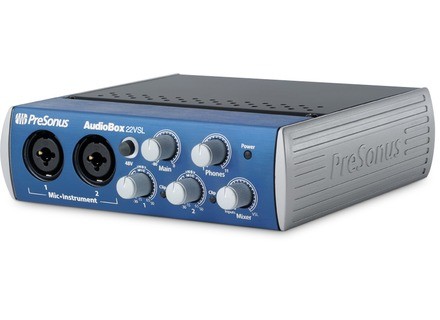 View other reviews for this product:
I was looking for an interface to replace my Lexicon Alpha for the home studio, it was becoming a bit tight for big projects that I have. In addition, moving a lot to me, good preamps, phantom power and an input / output integrated twelve o'clock is a real plus to minimize clutter.
Also the fact that it works without power supply makes it absolutely perfect for my use.

I found here everything (almost) what I needed:

2 XLR / intrument with good preamps and phantom power XMAX (which could be a name sports shoes ...)
1 entered and a midi output
2 RCA
a headphone output
volume control headset, hand volume, and mixing between the headphone between the direct and the PC (with VSL or another driver)

interface inside (vsl) to take advantage of a monitoring input on treatment with EQ, compressor, gate, reverb and delay, all without latency, which can be a plus when you record a voice.

I use it all with a mid-range laptop Acer Intel I5, and Cubase 5.
I put this note because it has everything I need, but more types of output would be top (which is the case with the Lexicon Alpha except for MIDI).

I use it mostly with his driver Audiobox VSL, which allows use of the VSL interface, but this does NOT use other audio interfaces simultaneously (for example my guitar pedal zoom G9).

The driver is stable for now. It cracks for large projects in large 88.2 khz (I just pushed to the limit I must say).

Latency is almost zero when using VSL, on the other hand when I listen for example my electric guitar plugged directly / instrument on Audiobox via a plugin on Cubase (Amplitube) the latency is too high (in 88.2hz) This makes recording impossible (eg of all this to my configuration).

The preamp is great, with a headroom not great but sufficient.
To illustrate I have a dynamic mic that I could rediscover through the AudioBox because the preamp of my table (basic behringer 8 track) were not powerful enough).

I note, however buzz when we use the two inputs simultaneously with two mics and phantom power mics when do not need it ... what good is a problem of making pe ...

It is very robust and the serrated edge of its buttons is that you can recover exactly the same settings from one time to another.

There is a CD to install the driver.
Everything started in less than 5 minutes.
Not really need the manual, it's very intuitive.

I use it for 3 weeks and has already worked.
It replaces my very Lexicon Alpha (very good product for its price aside), for its stability, connectivity inputs, its performance, plug-and even its design.
What I like most about this product is its own preamp, efficasses, and having really all in one box (preamp, phantom power, XLR, intrument, noon, and ensured its stability).

The feature that I like least is the problem of latency for recording my guitar for example in the hearing via a plugin (Amplitube) on Cubase is at 88khz for me (with my setup) impossible.

After the software VSL, it is convenient, but I hardly use it, it's a little gadget, but it can still be used. I tried a few presets not bad at all.

Some quibble for the headphone jack behind, well, it's not really a problem for me.
See the source
Did you find this review helpful?yesno
Cookies help us improve performance, enhance user experience and deliver our services. By using our services, you agree to our use of cookies. Find out more.