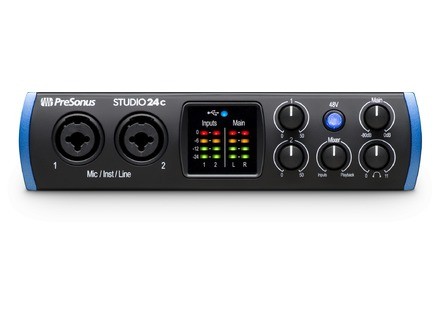 « Easy to use, install and with excellent sound/dependability & $1000 worth of software »
5

Value For Money : Excellent Audience: Anyone
Well, I was using the Stealth Pedal (IK Multimedia) as an interface, and then it no longer was supported. Then I turned to the Line 6 Tone Port UX8, and although those drivers worked (in Windows 10), I never could get it to record to simultaneous tracks, although there are eight line inputs. And so, where to turn for a new interface? There are a few budget units available, some with better reputations than others, and repeatedly the PreSonus line always came up as a solid buy, in terms of ease of use, what the entire package includes and its price. The unit that interested me was the Studio 24c, which is a dual channel with sufficient control ability and LED meters on the front, for that quick visual. It also has a very solid construction and weight to it, as indicated by several reviewers on YouTube.

Studio 24c was easy to install and set up with the quick-start guide (main manual downloaded off the PreSonus site), right out of the box; and so, that was a bonus. The Sync LED flashed blue immediately (its red when not synced to a computer). So far, so good. The interface connects to a computer via one of two cables included, a USB-C to A… or a USB-C to C. Further setup of Studio 24c communicates through its control app, Universal Control, so that you can select which (or all) driver(s) you want, but also sample rate, block/buffer size, language, etc. (For Windows only, you can set up a Loopback function within the Universal Control, useful for looping back audio streams to be recorded from one application to another, e.g., record audio from a YouTube video or music from a web browser or media player.) There are MIDI in/out connections for MIDI instruments and sequencing, but my setup is rather simple, with the Studio 24c connecting to the computer and with its two Audio Outs going to a mixer and monitor speakers. There’s also a ¼-inch headphone jack in the back panel, which comes in handy when wanting to keep sound levels down for private practicing, recording and mixing.

There are other features and controls that add to Studio 24c’s usefulness and quality, including class A XMAX-L solid-state microphone preamps (optimized for bus powering) and the two combo jacks for either XLR or ¼-inch inputs. When working with condenser microphones, there is a 48-volt phantom power (push-button engagement). The Gain controls (one for each channel) are used to keep the signal levels in check and below the -0.5 dBFS mark to limit distortion, and both Gain controls provide 50 dB of variable gain (0 to +50 dB for mics and -15 to 35 dB for line instruments). The two meters on the front provide a visual for both the Inputs and Main. Use of only one channel input will show only one input meter active (and for that channel). The no-latency Mixer knob blends the input signal with playback, so that you can balance the two or increase the mix of either. This is useful if you need to focus on one versus the other, whether practicing an instrument with backing tracks or mixing. With the Mixer knob placed at 12-noon, the signal is equal between input and playback. Turning the Mixer knob to the left increases input level and turning to the right will increase playback level (as simple as this may be, I had zero instrument input and couldn’t figure out the problem until I realized the Mixer knob was turned all the way right).

So far, the Studio 24c has operated flawlessly over the past few weeks, and recording has been easy and sounds great. The Studio 24c boasts 24-bit sound and 192 kHz conversion, and there’s a lot of high-headroom, which means really cranking the gear before entering into the yellow and red zones on the front-panel meters. As good as its low noise, high-headroom sound quality, the Studio 24c includes the PreSonus Studio One Artist DAW and Studio Magic software suite, the latter of which includes Ableton Live Lite, nine effects plug-ins, six virtual instruments, and tutorials from Melodics. In total, the full version software alone is valued at nearly $1,000, making the investment a no-brainer. There more information on this software package at this link:

In sum, the Studio 24c is a solid buy for $159 USD. It’s reliable, easy to use and install and the sound quality/drivers are first rate. Rarely are there negative comments on this interface, and the inclusion of the software makes it even more enticing. My short time with Studio 24c has not soured my decision, and so, if you’re looking for a basic interface with some added bells and whistles, the Studio 24c comes recommended highly.
Visit https://www.presonus.com