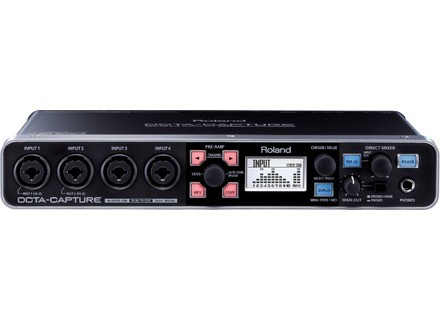 The AUTO-SENS function makes it simple for users to set the preamps' input levels when using multiple microphones. For example, when recording a drum set, pressing the AUTO-SENS button automatically sets the optimum input levels for all mic inputs as the musician plays the drums.

Octa-Capture features four software-controlled Direct Mixers, which allow users to set up independent monitor mixes and route them to headphones, speakers, or other recording and mixing devices. It features an internal 40-bit DSP engine and any input can be routed to multiple outputs.


The Octa-Capture can be used as a desktop interface, or mounted in a single rack space with the included rack ears. Octa-Capture comes bundled with the Cakewalk Production Plus Pack, a software suite that includes Sonar 8.5 LE, Rapture LE, Studio Instruments Drums, and more.

The Octa-Capture is expected to ship with an MSRP of $799.00 in October.