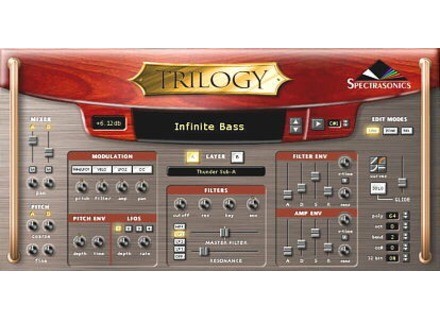 Product replaced by the Spectrasonics Trilian.

View other reviews for this product:
Trilogy was introduced in 2002 by Spectrasonics and, since then, it has become the tool of choice of many musicians when it comes to sampled bass guitars. I first found it in 2010 and since then I have been unable to find any other tool that gives me as many choices and possibilities and Trilogy does. I have never found compatibility issues, and that's a lot to say since I've used trilogy on six different hardware setups and for many different endeavors. There are no unnecessary steps when it comes to installation: you just place th 3gb samples file wherever you choose and run the software. The only issue is that the program comes, originally, in a set of CDs, so installation may take a while. The simple interface and ready-to-go general quality of the software makes up for it, though.

The software is really stable, and to be fair the only crashes I experienced while working with Trilogy were due to issues with Nuendo or overloading my sound card. As said before, I've been using it for four years and I've never had the need to look for other solution when it comes to sampled bass. Trilogy provides you with an incredible amount of patches to choose from, broken down into easily identifiable categories (that mostly rely on style, so that makes choices even faster). As it usually happens with this type of software, there is an overabundance of preset synth instruments, and that makes it a little harder to find the correct sound when working with certain types of electronic music.

As instruments are subcategorized by articulation or general dynamic range, you will usually have to load more than one instance of Trilogy, and eventually that hinders performance.

I particularly like the straightforward and visual appeal of Trilogy. You can easily create your own sound, either from scratch (though that's not what the program is designed for so that may be a little hard to pull off) or basing it on one of the thousands that the systems comes with by default. The presets include different types of bass (electric, standard acoustic, upright, synth) and it features an organization system with categories such as ''Old school'', ''Modern'', etc. that make it really easy to focus your search according to the type of music you are working with. The preset usually come in two different sound schemes, caled A and B, and you can adjust them individually.

The versatility of Trilogy is also an important point. I've worked in heavy metal, soft rock, jazz, and multiple other projects, using Trilogy for sketches as well as for final versions, always with excellent results.
Did you find this review helpful?yesno
Cookies help us improve performance, enhance user experience and deliver our services. By using our services, you agree to our use of cookies. Find out more.