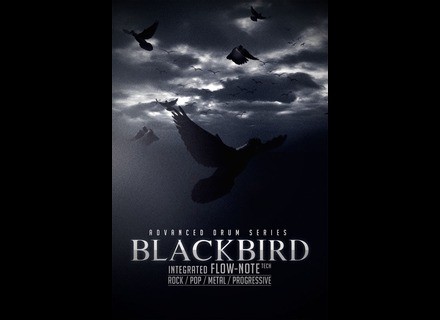 Blackbird, Virtual Drum/Percussion from 8dio in the Advanced Drum series.

8Dio called Taylor Larson (Ocean Studios / Periphery) to record a Mapex drum kit with which they created Blackbird, a new library for Kontakt.

Blackbird features over 37,500 samples from a Mapex kit recorded with 10 mic positions that can be moved and mixed in the full version of Kontakt 5.3 and later, with the ability to send each channel to a separate output and individual virtual processors (spread, EQ, compressor and lo-fi). Each mic also has its own pan and reverb controls.

Along with the 20 GB of content (7 GB HD lossless compressed), 8Dio did quite some coding and used, for the second time, their Flow-note technology to recreate the sound generated with the cymbals repeat (the sound is partially muted and part of the previous hit is heard).

The 3D style GUI for Kontakt gives you the ability to choose the elements of the drum kit you wish to use, adjust their volume, pan, tuning, attack and release. Presets are also included and you can remap the drum elements to your controller keys.

Blackbird is available for the introductory price of $149 instead of $249 until October 1st at 8dio.com. You’ll also find on the website the full drum kit mapping.