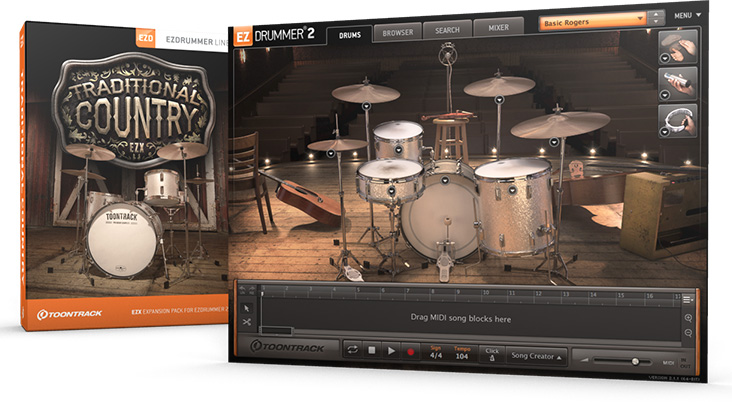 Virtual Drum/Percussion from Toontrack belonging to the EZ Drummer series.

Country Month continues at Toontrack and this week's new release is Traditional Country, a new EZX library for EZDrummer 2 and Superior Drummer 2.

The Traditional Country EZX was recorded at the Quonset Hut Studio, the first-ever recording studio on Nashville's famous Music Row. With the guidance of original players, staff, drawings and notes from the era, producer Glenn Rosenstein and master engineer Jeff Balding aimed at replicating the sound of an authentic 1950s session. The drums include two late ‘50s and early ‘60s sets by Rogers and Ludwig as well as an Apollo MIJ kit. According to toontrack, all were recorded with period-correct gear.

The Traditional Country EZX is available now with a MSRP of €69.

A special, time-limited EZX Country Value Pack bundle including the new Traditional Country EZX and the older Nashville EZX is also available for a MSRP of €79.