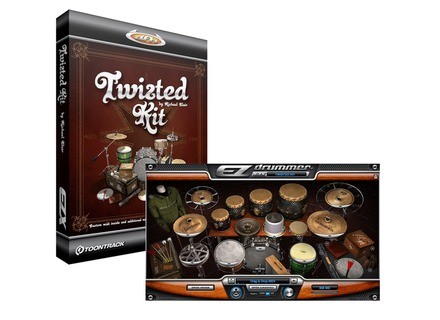 Buy this productView price information >
View other reviews for this product:
I had no problems installing this expansion to ezDrunmmer. Toontrack is very good about their installers, and they are very easy to get through. I had no compatibility issues, and configuration is almost non-existent since this just loads into your existing ezDrummer installation. The manual is short and to the point, and explains everything you'll need to know about this expansion.

I have a Windows based computer that is a Dell, and it has a dual core processor. For sound card I have a MOTU firewire card, and I use it with the Nuendo host. This expansion works perfectly with my system. The CPU load is relatively light compared to other drum programs, but you can expect to have a heavy hit on your ram, which is about 300MB of samples with the default setup loaded. It is very stable, it has not crashed that I have seen.

I have had this for nearly a year I believe. The best thing about this is the really odd sounds they give you. Things like hitting a desk drawer, zipping up a jacket, and hitting a pan. These are sounds that can really give your song a unique touch that you probably wouldn't otherwise think of. On the other side of the coin though, the fact that these sounds are so weird definitely limits their usefulness, so I have ended up rarely using this expansion. I will say that when it has been used though, it has been great. So overall I feel that this expansion is not really necessary for your ezDrummer collection unless you have some extra money and you want to have a luxury. It is not the greatest value, but it is nice to have for that odd song that needs something different. I would probably not get it again.
Did you find this review helpful?yesno
Cookies help us improve performance, enhance user experience and deliver our services. By using our services, you agree to our use of cookies. Find out more.