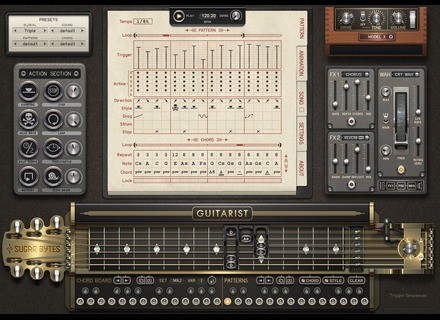 Sugar Bytes has announced the release of Guitarist, which is described as "the complete software solution when authentic guitar tracks are needed".

Guitarist includes different guitars, amps, effects and a versatile step sequencer system which makes it possible to create "insane" guitar riffs and licks on the fly, guitar riffs, combined with amps, wah pedals and effects. The actual guitar player has been transformed into a step sequencer system that allows control of playing styles, chord progressions and song structures. Guitarist can be played live as well, with just two fingers you can combine chords and patterns easily. You can choose from factory chords or just create your own chords on the fingerboard. The Action Section allows you to tweak the sequence in realtime and apply timestretch, looper or other crazy effects.

Some more info about the single features:

Guitarist costs €199 / $249 and is available now for Mac OS X and Windows in standalone and VST and AU instrument plug-in formats.