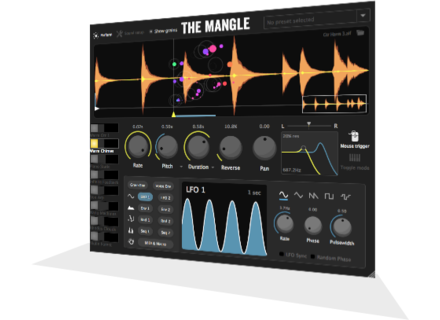 The Mangle is a granular synth/sampler plug-in currently available as a public beta for Mac OS X in VST and AU 32 and 64-bit formats.

The Mangle displays on the screen how the grains move on the waveform in real time, or better said, waveforms, with three different high, mid and low waves.

The plug-in is multi-timbral, with 8 different slots, each with its own sound and parameters, that can be MIDI mapped to create patches.

The plug-in also features two sequencers that can be used for rhythmic patterns or to modulate any parameter. Last, you can drag and drop Modulators and configure them individually.

The Mangle is currently a public beta plug-in for Mac OS X only, a Windows version will soon be released. This version included 4 presets, with more to come in v1.0. The plug-in is available for the special price of £19.99 at sound-guru.com. Trial version will be released with the final version.