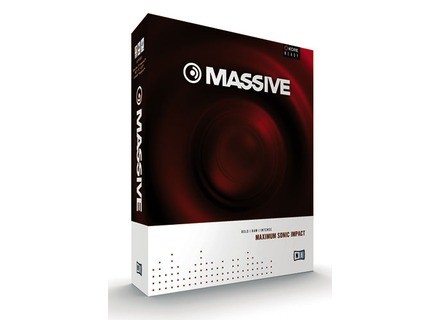 View other reviews for this product:
I decided to put a notice for each of my favorite apps. It would have been difficult to ignore Massive, although many other reviews have already been posted for ages.
Easy installation. Authorization on-line without too many problems with the software "Service Center" comes with each soft in NI.
Mass is accompanied by a French manual of 124 pages (let it to go around the parameters available) there is no need to go. Massive is not that complicated: It is very intuitive and contrary to the essence, we can do without instructions. But it would be a shame to miss small interesting features like the side-chain or "bypass mix", for example.
For comprehensive overview of functions horizon, I refer you to the comprehensive test Wolfen. Just remember that Massive is a subtractive synthesizer and wavetable. Note that we have available 86 waveforms well differentiated. Still, the originality of this synth is not located here. Yet Massive sound good to him that clearly differentiates it from its competitors. It's the result of a choice of parameters thoughtful, very effective, that are unique to this synth and who even before attacking the filters, you can have extremely varied sound materials. Emphasize at this point the relevance and effectiveness of the "oscillator modulation" which greatly helps to twisted sounds.
The filters themselves are very good quality and some types are suitable for Massive ("acid", "daft" and especially the very characteristic "scream", which is aptly named.) Then, the effects inserts help make sounds more "rough" and master effects sound great. Note among them a find: (. But can recognize a mile from his created Massive) the "Dimension Expander" which gives a great extent your presets
Finally modulators (ADSRs, LFOs, Performers, Steppers, Macro Commands) are very well done and way stations, ergonomic and always to have an overall view is just great.
So if Massive is not distinguished from its competitors by its basic concept is in fact a remarkable amount of detail that give it thought and originality that make this synth requires a sound all its own.

Perfect stability and smooth operation on Mac Pro, Mac OS 10.6.8 and Digital Performer. CPU consumption is very reasonable in normal use, but with a 64-channel unison oscillators plus three "oscillator modulation" the limits of my processor it borders. In this extreme case, I would have turns any other plug-in my DAW. But hey, there's plenty to do without seeking such ends.

I use Massive for years and I can easily say that this is one of my favorite software synths, quality and originality of sound, range of possibilities and ergonomics.
When he came out, Massive seems he struggled a long time to find its audience. First, because saturating the processors of the time, but probably because its presets really fit in with any known musical style. In addition, its sounds rather icy could divert part of the race warm sound. But in recent years it has become one of the most popular software synths. Just to realize, to see the frightening number of tutorials found on the web. Certainly, "dubsteppers" is are seized and have done much to its reputation. But it has also come to realize that Massive excelled as to create extremely punchy sounds tablecloths and very spacey reasons, and we finally had to deal with a very versatile synth. And finally, Massive embodies pretty much the sound of modern electronic music.
Among VSTis I have, Massive is competing with two wavetable synths: Predator and Gladiator. But it beats Predator in its ability to produce sounds which differ from common synthesizers and it surpasses its Gladiator great intuitiveness and ease of programming.
In fact, by its strong personality, Massive Massive sounds. And whatever the infinite variety of sounds, they are often quite identifiable. The only risk he runs so is that the mode changes. But hey, I bet there are still new sounds to do with this wonderful synth and it has not finished delight us especially if used in music that eschewed major trends that make mode.
See the source
Did you find this review helpful?yesno
Cookies help us improve performance, enhance user experience and deliver our services. By using our services, you agree to our use of cookies. Find out more.