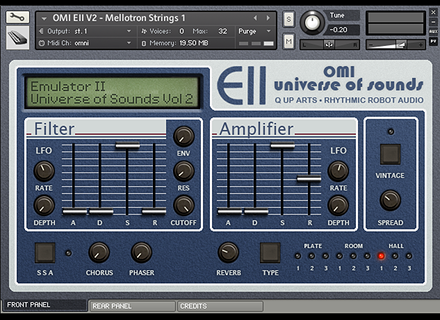 Rhythmic Robot has released volume 2 of its Emulator II OMI Universe of Sounds bank for Kontakt.

Produced with the authorization of the original bank's conceptor, Doug Morton, the Emulator II OMI Universe of Sounds: Vol 2 is made of over 540 Kontakt sound libraries sampled from the original bank that first was designed for the Emulator II, which is described as one of the most famous samplers from the 80s. This emulation (of an emulation, actually) is said to render tho original Emulator II's 8-bit sound, punch, weight, grain and texture.

Compared with the content of volume I, the emphasis is a little different with a wide range of classic analogue and digital synths represented, while brass, string and orchestral sounds are characterised by smaller selections (but greater fidelity thanks to a more in-depth sampling).

As for volume 1, every note of every patch has been separately sampled out of a reconditioned EII, and the resulting sounds are announced as "effectively indistinguishable from the real thing".

To celebrate the release of this new library, Rhythmic Robot currently offers reduced prices on both volumes, making Emulator II OMI Universe of Sounds' volumes 1 and volume 2 temporarily available for £85 each instead of £99. A full version copy of Native Instruments' Kontakt v4.2.3 or higher is required.