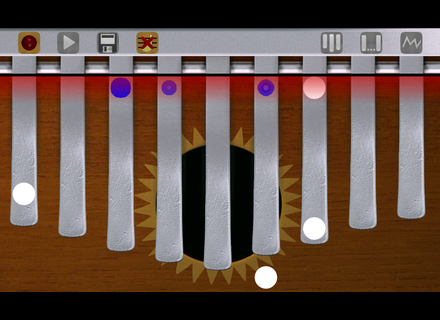 Apploudable has announced the release of version 1.3.1 of the Kalimba app for Android.

This version introduces a new play-along feature resembling Guitar Hero, Stepmania and others. This enables the user to play several famous songs.

The Kalimba, also called Karimba, Thumb Piano, Lamellophone, Mbira, Sanza, among others, is a musical instrument from southern Africa. The keys are plucked with thumb or fingers, and the vibrations are amplified by a hollow box resonator or sounding board.

With the Kalimba Android app the user can experience this African instruments. It can configured like any kalimba with up to eleven keys. The tuning of the keys can be set to any scale. Unlike a real kalimba, these can be saved and restored. The Pro version also supports MIDI over WiFi using DSMI for Windows, Mac and Linux.

The Pro version ($1.49) has four different sounds, eleven tuning scales and custom tuning of each key.