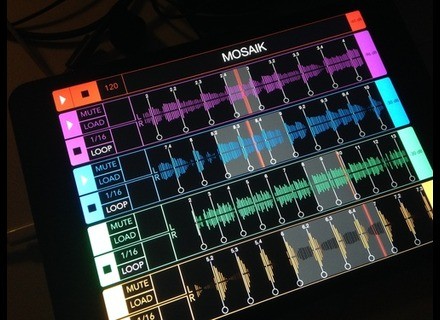 Endeavour released Mosaik, its first iPad app that combines a looper and a time stretcher.

Mosaik plays samples that you import via AudioCopy/AudioPaste, iTune file transfer or the iTunes library. A beat detection algorithm is included, as well as a time stretch algorithm called “BSOLA” (Beat Synchronous Overlap Add), which allows, according to Endeavour, for preserving attaque and decay phases of the sound content.

Mosaik is still under development, and Endeavour decided to release it for the special price of 0.89€ / $0.99 until the next major update, which should include Audiobus support, real time recording, onset-note detection, multitrack (16 simultaneous tracks), markers and improved audio quality.

Mosaik is available at the AppStore.