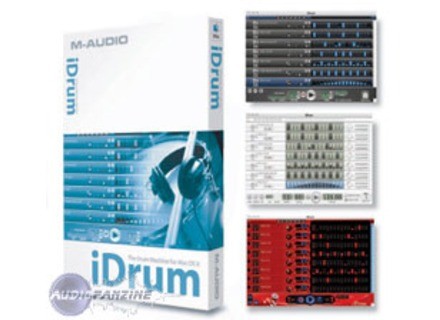 View other reviews for this product:
iZotope's iDrum is a program set up for those who need a solid electronica drum kit. It's set up to be easy to use, compatible with tons of devices (including the iPad) and sound fairly solid. I should mention right now that I deal with mostly heavy metal music, but I do dabble in electronica at times. The program contains various different loops and drum kits ranging from some acoustic sounding ones to fully synthesized sounding ones. You can use this plugin either stand alone or in a DAW. I never experienced any compatibility issues while using this program. I couldn't tell you how nicely written the manual is because I never read it, but iZotope usually has great manuals. Everything is super simple to use, even in the touch interface.

iZotope really excels when it comes to compatibility and performance. First of all, this plugin is cross platform, so it'll work in both Windows and OS X. It'll also work on your favorite iDevice. Performance wise, it doesn't take up too much memory when you use it, and that's a good thing considering how precious RAM can be during the recording process. The biggest gripe I have is that this plugin is a 32 bit plugin. Considering how everyone is moving towards 64 bit DAWs and OSes, I'd like to see the next revision of this application follow suit. I've only been using this plugin for a few months, so there could be things I haven't quite discovered yet. Like I said, I'm not really an electronica guy.

When I'm creating electronica, I usually just enable Ultrabeat in Logic or something to that effect. It can do just about everything I want and then some. I also have some custom kicks, sub drops and beats such as those that I drag and drop into mixes. As a result, I don't find myself using this program all that much. I bought it with a group package, but it's probably one of the lesser used plugins in my arsenal. If you're big into electronica and rap, it'll probably work out nicely. On the other hand, it might be a bit too simple and lacking versatility that something like Ultrabeat may have.
Did you find this review helpful?yesno