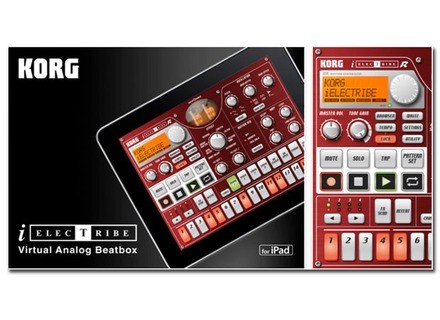 iElectribe for iPad, Virtual instrument for iPhone / iPod Touch / iPad from Korg in the ElecTribe series.

With the official release of the Apple iPad, Korg now officially announces the iELECTRIBE.

Korg ELECTRIBE products have been popular due in part to their interactive front panel controls. The iPad’s 9.7" multi touch display offers a layout that will be familiar to previous ELECTRIBE users. Just as on the original ELECTRIBE, users choose one of the eight parts (or sounds) and touch the 16-step sequencer to quickly build patterns and grooves.

The iELECTRIBE recreates the historic ELECTRIBE•R’s entire sound engine – including analog synthesis modeling and PCM synthesis, along with virtual Valve Force tube modeling. The sequencer can record instrument parts as well as advanced Motion Sequencing – the recording of knob movements as part of a pattern.

The Master effect processor provides eight enhanced effect types. The iELECTRIBE comes preprogrammed with 64 new preset patterns that allow the user to create music in a variety of dance and electronic music styles; the user can also create up to 64 patterns of their own.

Pricing & Availability
The iELECTRIBE is currently available from Apple's App Store (inside the iTunes Store). Regularly priced at US $19.99, a special introductory price of $9.99 is being offered until June 30, 2010.