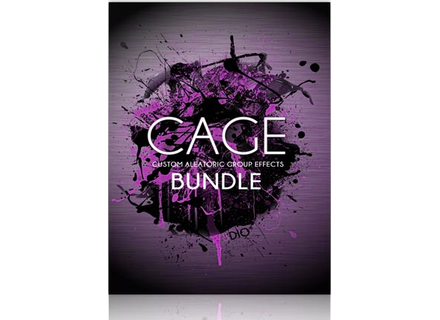 8DIO is about to release Cage, its mega orchestral effect sample library for Kontakt. Three dates have been scheduled for the full release.

Cage features more than 63GB of samples and includes a new Cage Chaos engine that allows for controlling more than 1500 sound parameters and randomize the brand new Rack-FX system developed by 8DIO.

The recordings were made using 5 Ensemble microphones (close, mix, decca, far and wide) and 4 Divisi mics (spot 1 to 4), all can be mixed in Kontakt. The library also includes convolution presets and thanks to custom scripts, you can round robin between articulations and create complexe effect chains from the different presets.

Cage will be available as a bundle or in three libraries (Woodwinds, Brass and Strings).

Cage Bundle and Cage Strings are already in pre-order and will be released on February 20th ; Cage Brass will follow on February 27th and Cage Woodwinds on March 5th. If you order the bundle, you will first receive Cage Strings, and then the two other libraries when released. Introductory prices are offered until April 1st as follows:

More info and pre-order at 8dio.com.