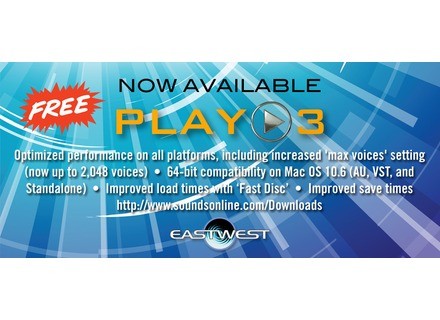 EastWest has announced that the PLAY 3 Software Update is now available for download (currently v3.0.15).

PLAY 3 has been improved and optimized on both Mac and Windows platforms. Sample Streaming and CPU performance have been improved, and for the first time the user can now set their maximum voices all the way up to 2,048, double the amount possible in PLAY 2.

On Mac OS 10.6 and later PLAY is now fully 64-bit, allowing you to load larger projects than ever before. Both saving and loading times are now improved (especially when using the new "Fast Disk Mode" - see below), the company says.

Apart from optimizations, EastWest say they have also solved several bugs and known issues that were present in previous versions of PLAY.

Fixed and enhanced in PLAY 3:

This update is recommended for all owners of PLAY 1.0 and above on Mac OS X (10.5 and later Intel Macs) and Windows (all versions). All installed PLAY Virtual Instruments (Software) will be updated by this Play Software Update.