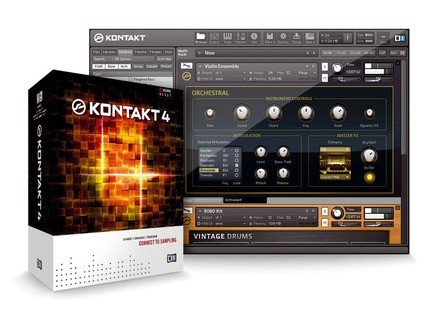 Value For Money : Excellent Audience: Anyone
View other reviews for this product:
Kontakt is my one and only sample player. It's a strong and versatile program and after using it for about 7-8 years I'm still learning more and more about how powerful this thing is.

I generally use Kontakt as a plug-in and outside of some occasional samples I've programmed myself in some of Logic's synthesizers, I use Kontakt exclusively for sample playback, editing, and creation. Most projects I've done start with me opening a multi-channel instance of Kontakt and loading up the sounds I need. For a complete beginner it might take a bit to realize the full potential of this program, such as the sample editing capabilities and using the multi-channel aspect to save CPU, but it's generally straightforward. Once it's loaded up, all you have to do is find your sounds and double-click.

The Kontakt sound libraries themselves are pretty decent although not the best. The orchestral samples are very flexible and controllable, but just don't sound that great. However, they can be effectively utilized mixed-in with more professional samples for a bigger, fuller spectrum of sound. I find the strings, for example, to be a bit harsh but that can be great if you want to boost the upper frequencies of a more dull string patch, or a synth pad. In the end, there are some decent sounds in there but you have to go looking. The best thing is to separate all the sounds that really excel into another folder for easy access.

Besides being a great sample player, Kontakt has been really useful to me in creating and editing my own samples. You can drag and drop any audio file into the Kontakt interface and it is immediately mapped out and pitch shifted onto the midi keyboard. After that you are free to edit the audio in so many different ways and add other audio files as well to make an entire sample collection in one .nki file. I've used this function to create my own sample libraries of percussion instruments that I've collected over the years and I've already started on some cool flutes and other wind instruments I've got lying around as well. It's an incredibly easy process and can also be really useful for sound design. You can drag any audio audio at all in and then mess with it as much as you want. Sometimes the results of random experimentation can be quite useful.

I really can't see any big cons to this software, I'm just such a fan. There isn't much it can't do and there are seemingly endless possibilities.

Cheers!
Did you find this review helpful?yesno
Cookies help us improve performance, enhance user experience and deliver our services. By using our services, you agree to our use of cookies. Find out more.