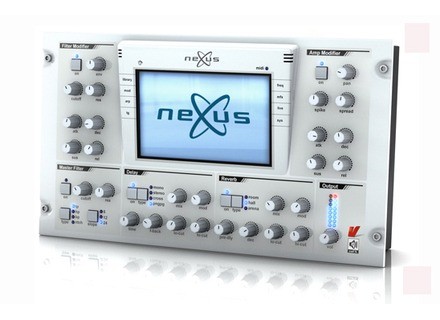 View other reviews for this product:
I'll admit, I'm a musician first and a producer second. I have a hard time finding instrument plugins I like. Most are really hit or miss for me. If I can't get a good sound in 20 minutes I'm done. Out of the box Nexus is surprising. There aren't many controls. You have to go through the menu and find your sound by name. You aren't given any choices really about manipulating these sounds outside of delays/reverb. For me this was a welcome surprise. I simply picked a category and found a sound I liked. No knob twisting involved.

I produce a lot of different genres. It seems like Nexus can hang in any of them. I will say that the primary use for most of the sounds seems to be techno/dubstep/rave music but that's not to say their aren't a ton of other options. There's hip-hop and 80's stuff. More pop sounding synths. I'm pretty amazed at the sheer variety of usable things. It's got drums, bass, lead, strings, guitar, whatever. The pianos and electric keys in particular are really cool. Sometimes it can be kind of daunting. But chances are if you can dream it, it's in Nexus somewhere. That's what I like about it. It's the one plugin where I can open it up and KNOW that the sound I'm looking for is in there somewhere. It runs fairly fast although it's not the lightest on cpu. It eats up ram a bit too. I have seen more power hungry instruments but I've definitely seen lighter ones too. If you have a decent rig it's a non issue. I use it with cubase and have no problems. Every blue moon it will decide not to change presets and I have to restart.

I like how it's user friendly in the sense that I don't have to turn 50 knobs to get the sound I want. I can just look it up via categories. Easy for a guy like me who isn't a total synth nerd. The value is pretty good. Not cheap but darn if you don't get a ton of sounds here. And all great quality too. That's the thing for me. Every sound is high quality and that's a rare thing for synths like this. Very impressive.
Did you find this review helpful?yesno