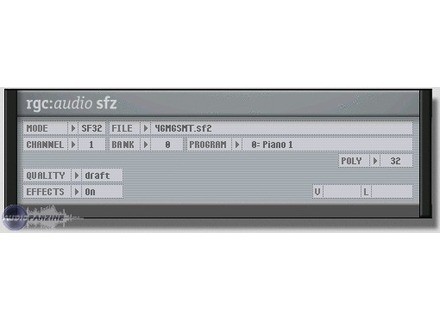 View other reviews for this product:
This is a player soudfonts vst.
No major problems, it works well, easy to use.

Attention to small configs: on celeron400, 196Mo Ram, Extigy and fruityloops, this player is rather resource-intensive. A reserve for large configs so

I downloaded a few days ago, just to test it, just by eating cpu deu.
Fun little gadget, there are jokes that appear in the center

Basically, a lot of parameters, but fat consumption cpu read (you'll understand ...)
Note the easy access to banks, programs and channels.
It's free and it's here:

http://www.rgcaudio.com/sfzfaq.htm
See the source
Did you find this review helpful?yesno
Cookies help us improve performance, enhance user experience and deliver our services. By using our services, you agree to our use of cookies. Find out more.