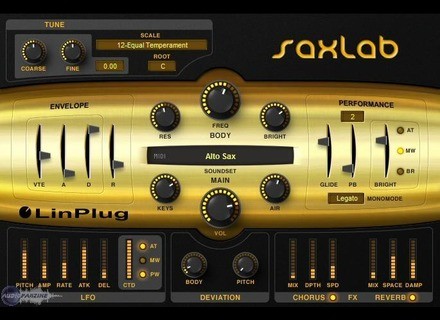 View other reviews for this product:
No remarks.

I was impatiently waiting for the demo version to get an idea.
It's up to you to decide, but for me the best sound of this VSTi is the FLUTE!!!
It was so disappointing.
You can't really say that all sounds are crap, but this VSTI doesn't provide anything that you wouldn't get from a fine-tuned sampler preset.
What's more, the samples are very short and some are even poorly looped.
They tried to mask it with vibrato, which isn't very realistic by the way, and lots of reverb and, sometimes, chorus.
The demo is supposed to be the same as the complete version, with the only limitation that you get some white noise from time to time.
It lacks some sounds like the baritone and, especially, soprano, which, as everybody knows, is the hardest sax to reproduce correctly.

How do you expect to reproduce different sax types with only 23 Mb of samples (which is the technology used by linplug) when a single quality preset can be bigger?

After having tested it I went to linplug's website and discovered that they even dared use musical demos. I would be surprised if it sells well.
Listen to them (especially Mr ME).
I don't think the BRECKER brothers will go jobless any time soon.
Very disappointing! I wouldn't use it even if it was free!


It's miles away from a VL-70m together with a wind instrument controller like the EWI.
Some recordings made with the latter combination are simply stunning.
Some people can even reproduce all the nuances of a sax.
Growling
Tongue attack
Realistic vibratos and bends
Now it's your turn to test it.
Did you find this review helpful?yesno
Cookies help us improve performance, enhance user experience and deliver our services. By using our services, you agree to our use of cookies. Find out more.