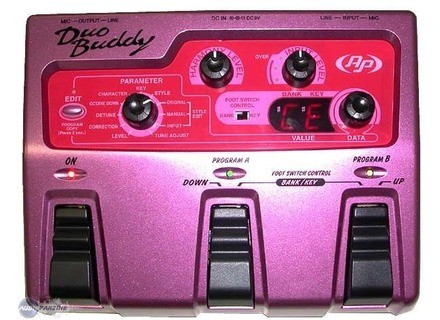 View other reviews for this product:
The Duo is a Buddy pedalier effect for singer who can do backing vocals on his way ... more or less serious (you can go up the path type from beyond the grave) more or less acute (up type way of child) ... as rglages.
in fact it is exactly the same principle that a guitar pedals but the way ... and produced vocals. (Not at all rackmount)

- What technology is used? Digital

- What is the connection? can enter jack or xlr ... and for output we have two options: go out xlr something mix (+ standard gauge track with effects), or while out in the normal way with the xlr + effect on one line jack spare.
I personally use the solution on deuxime scne by plugging the effect of a case with direct dial (as a sound engineer on the effect gre way as he wants, table)

- The configuration gnrale Is it easy?
trs simple
- The edition of sounds and effects is it easy?
so if you have some knowledge of harmonies (that is, what kind of chorus you want ... for example the third?)
- The manual is clear and sufficient? ...
yes it is plain as the tool is very simple.

- Effects are they effective, suitable and adequate ralistes?
effective they are but sparingly: it is a type of effect that quickly becomes tiresome if used all the time. nevertheless can give a power of screams in styles such as metal ... against this is by no means raliste ... plutt path of robot ... and I deeply regret that so little efftes difrencis each other ... in fact I only use three presets on the total because the rest are too similar and less well ...

- Which instruments do you use? the way

- What are those you prfrez, you dtest? in fact the only effect of chorus that I find interesting are the least ralistes: the most serious and acute

- How long have you use it?
6 months and I have unfortunately been around, I get tired so I plan to sell 300 m'achter a voice from home digitec.

- What is the particular feature you like best and least?
What I really ESG is on scne presets are not stable! Let me explain: it happens too often that the preset change alone without being asked and without any you press the pedal: so that instead of the preset 3C we are left with the 2C for example ... it is not reliable.

This is a little too con is that the machine does not work with cell ... have to lug around a 9v adapter. As against what is nice is that: as a guitar pedal, if the effect is more food (eg if the transformer is unplug) the same mic on when ... without effect.

- Have you tried many other models before acqurir?
I admit not having t excited about this type of effect pedal song (XLR) that functions as a guitar pedal ... the era I had not heard of Voice 300 (I know it's the only song that pedalier exist, and it is a shame)

- How do you report qualitprix?
Too expensive for the performance of this type of toy.

- With the exprience, you do again this choice? ...
No, as I said probably I will opt for a 300 voice, for the cot pdalier ... or it may be a tc electronic M one with a MIDI pedal.
See the source
Did you find this review helpful?yesno