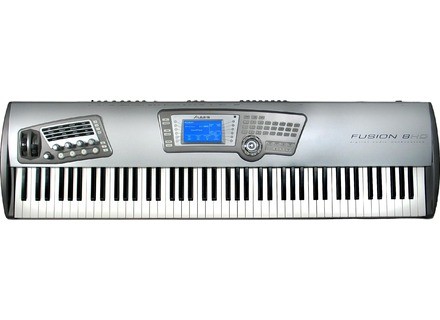 View other reviews for this product:
Workstation Keyboard 88 heavier notes. Germany controlled by the Net came home in 72 hours as a double original packaging (unopened) 20% less than the best price in France and 35% cheaper than the official price. Disappointment unpacking a single power cable, a manual in English and nothing else. Back on the manufacturer site to find the latest version of the OS and the notes thereto. The first grip is easy and intuitive. Left wheel pitchbend adjustable modulation wheel control panel assignable.Un four knobs for easy arpegiatteur 4 functions, 4 functions filters, equalizer 4band, plus 4 assignable functions by software. A large volume knob notched, 4 push triggers (triggers) assignable to various functions, two-button switch S1 and S2 function On / Off assignable. In the middle of a good size screen with a blue background, not touch. Just to the left of the six key functions of the machine. Programqui access is sound banks, Mix, which combines the sounds (equivalent to the combination of Korg) and choose the sound track mixing. Song used to create a song or a piece from scratch. Sampler that enables this function by the stereo audio input with adjustable gain. Mixer that activates a mixer 32 MIDI tracks 8 simultaneous audio tracks with the usual controls track (solo, Vol, pan, mute, insert effects ...). 8 input jack on the back for creating eight simultaneous audio tracks to an external source directly to disk on the integrated 40GB hard Dique. From either side of the screen, the "soft buttons" used to activate certain features that appear on the screen. Rightmost panel of the main sound choice "programs" by 16 letters quick combinations and a choice of 8-digit bank. Below is a handy-wheel "wheel" navigation surrounded by seven buttons, the main one "EDIT". Finally the bottom right a control block type tape recorder to record mark ... read Ergonomics touch any of these functions including the keypad is extremely pleasant and gives an impression of solidity and build quality. On the back of the unit is even while the headphone jack would have found its way to better. 3MIDI, SPDIF, OUTPUT AND HAND, TAKE 3 PEDALS. INPUT STEREO Sampler, 8 audio inputs DTD.USB 2, TAKEN TO CDRW ...
The navigation screen to enter the heart of the beast as long to linger a bit. Almost everything is editable, assignable, mixable, monitor, record its own banks or flash media card (not included). The sequencer supports 32 MIDI tracks and 8 audio track is edited simultanées.chaque and mastering is possible. The effects are many but no processor or voice vocoder. It will go through the audio inputs ... As against this, access to FM synthesis, virtual analog synthesis and physical modeling programs ... 500, 100 Combi, 32 drum kits, 128 General MIDI. In the basic version of the OS. One approaches the concept of a Oasys ...

As long as we stay on the control surfaces and major efforts have been made to use easy preset (see above), the Fusion is very fun and enjoyable. When it comes to edit or assign and edit via the screen medium is more difficult than on a computer screen. However, once the stuff learned, are found in each chapter and ca simplifies your life. An ingenious system of shortcuts can save time. I said everything is editable, and every change can be stored on personal bank unr and even transferred (for example block transfer of the envelope of a mix to another mix). The English manual is actually very easy to understand but must read the reference manual in full. There are a lot of space which allows many annotations and translations in French. Read with a pen in hand and a stabylo ..

The sounds are varied and many use different methods of synthesis which gives a great interest in the machine. I think everything is possible as far as missing or sounds can be sampled and edited and the 8 audio inputs allow you to record a full orchestra in the DTD. Then grind the track by track with the sounds of the machine or those sampled etc ... The possibilities are endless as the Fusion can feed on anything that sounds like there is on the market.

I use it for 15 days. It&#39;s not super pro, but versatile and responsive to the needs of creative musicos did some stage. I tried the Oasys, it&#39;s better but I can not afford. I come from a Korg 05R / W Roland fp1 a PC and a planter out of breath by Acid and Cubase and plugins. I&#39;ll find all this and more on a single machine that I will still connect to my table and my Phonic dynamic Fostex speakers. I can enter the MicroKorg of my son and his amazing vocoder on the audio inputs, 2 Kaospad borrow her for "special" effects and to blackmail his girlfriend live to disk for my future summer hit. At that price at this level and the Fusion has no competitor. Alesis thank you
See the source
Did you find this review helpful?yesno