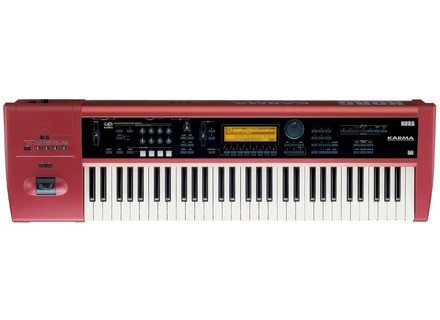 View other reviews for this product:
For all dtails, see the datasheet (too lazy to Retailer is too long)
Keyboard trs enjoyable, the Controller of effects in real time are really great to live ... Karma function is just great (even has become almost too easy to make good music .... short!)
I only reproach lgre incompatibility with Macintosh .... (You have to format the floppy disk in DOS so that they can be compatible with the KARMA .... not great when it is exclusively for Macs quip .... But the quality of the synth gnrale done quickly forget what inconvnient lightweight!)
And also for the small dception squenceur: we must indeed change the sound in the programs to get the sound you squenceur the DSIR (but apparently that's what t fixed in the update .... I have not done!)

Use trs simple once you got used to the menus a bit complex .... Regarding the manual, I will be silent on this point (too much press discovering the instrument, I did not read ... and yet has more than two years that I buy!)
The edition of sounds and effects is very simple ... when the synth connate (at beginners, it's a bit difficult .... Karma is not a synth trs intuitive, even if it's a great machine r ves!)

Sounds just fantastic!! (At least for the styles that I explore, namely, electro, Medieval music, the goth-rock gnral, but also classical.)
The piano sounds are trsralistes when it deigns to add a touch of rverb, which increases the depth and brings out (I could compare the sound with my piano, and even re-create a sound almost identical effects .... Vive!), violins and other stringed instruments are trs good (except the guitars, but After all, it's not a synth? ) and all electro sounds are really at the top level. We must, of course, love the sounds korg ....
The expression is trs good, but I regret that karma does not exist in version 88 keys, heavy touch, allowing a better "feel" the note playing.
There is no sound that I dtest, for against the "noisy Stabber" to boot the program can be pnible if you forget to lower the listening level of the speakers .. .. Notice to fans of "I put the bottom zic" lol

I use it for more than two years, and if I had to go rear, I would do it chosen without hsiter! Karma is a synth or a workstation, it has me!! (Ok, j'affabule, but when karma and humanizes the function that adds the random image mode, you really feel that the synth is alive and he is improvising .... gnial!! Thank you Stephen Kay!)
I love the original design of karma (well, it sounds drisoire compared to other functions and hyper dveloppes of the machine, but it's a bonus!) Is quickly tonnes plastics, synthetic untransportable gigantic, and in addition, the color is nice!
Only small default: no vocoder as in the Triton for singers .... but at the cost of Karma, do not abuse, either! And personally, if I had to choose between Karma and Triton (without looking at the rates ct), I will choose the new Karma karma for its function (as rptitions!) Which is much more than a simple arpgiateur! The report is qualitprix my opinion unbeatable ...
See the source
Did you find this review helpful?yesno
Cookies help us improve performance, enhance user experience and deliver our services. By using our services, you agree to our use of cookies. Find out more.